The Drafthouse domination: Keeping up with the Alamo's rapid U.S. expansion

The Drafthouse domination: Keeping up with the Alamo's rapid U.S. expansion 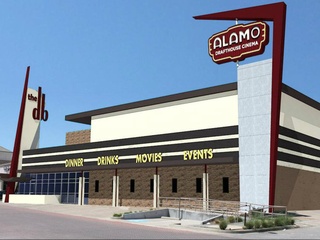 The Alamo Drafthouse rocked the country last year when the hilarious rambly voicemail left by a customer who was kicked out of the theater for texting made national headlines, leaving non-Austinites feeling a little left out.

Well, the wait is over America: soon there will (probably) be an Alamo near you! It seems like every other week, the legendary cinema is announcing a new theater in an often unexpected corner of the country.

Earlier this week, the Drafthouse announced its newest destination in Yonkers, which will be the second Alamo opening in the NYC area; the other is to be located in the Upper West Side of Manhattan.

With all this expansion, it’s a good time to pause and catch up with the rapid-fire expansion of the not-so-local-anymore theater that we love with all our hearts.

As the birthplace of the Drafthouse, Austin is home to five theaters: Ritz, South Lamar, Village, Lake Creek and now Slaughter. San Antonio comes second in the list with three Alamos — well, four if you count the actual mission.

There were two theaters in Houston, but the West Oaks location closed down earlier this year to make room for two new theaters currently under construction. That makes a total of three in Houston within the next couple of years.

The DFW area will soon experience the theater in Richardson, Texas. Close proximity to the University of Texas, Dallas and a large population of UT alums is sure to make this an ideal location for the quirky little theater that could.

A Washington, DC location is scheduled to open in 2013, neighboring the Winchester, Virginia theater that opened in 2009. Other out-of-state theater announcements include one theatre near Denver and another in Kansas City, Missouri, in the Main Street Victorian-style AMC flagship theater. Both are set to open sometime next year.

After rumors of a west coast Drafthouse developed, founder Tim League confirmed in February that there will be a theater opening in San Francisco. After a massive historic renovation of the famous New Mission Theater, San Fran will be home to arguably the classiest Alamo to date.

Not only will each of these new theaters enforce the infamous no-talking policy that sparked a million likes on Facebook, but the Alamo promises to keep up the movie-themed humor, the genuine respect for cinema and the creative film culture active in every new location.

Will the expansion ever stop, or will the theater chain dominate the entire country with its popular (and, frankly, much-needed) improvement on the standard movie-going experience? One thing’s for sure: this Austin-based company is just getting started.