Lululemon founder Chip Wilson is stepping down from his position as chairman of the board. Photo courtesy of Lululemon 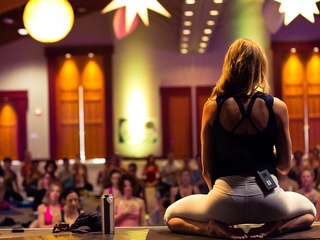 The yoga pant controversy was just one of several Lululemon PR nightmares in 2013. Lululemon Athletica/Flickr

Chip Wilson, the embattled founder of Lululemon Athletica, has resigned from his position as chairman. The company revealed the unexpected move in the same breath that it named a successor for CEO Christine Day, who announced her resignation in June.

Laurent Potdevin, formerly of Tom's shoes and Burton Snowboards, will be Lululemon's next CEO. "Lululemon's success has always been and will continue to be my highest priority," Wilson said in a statement. "As Laurent joins as CEO, I believe that now is the right time for me to begin to transition out of my role as chairman of the board."

Lululemon's downward PR spiral dates back to March, when the high-end yoga clothing company recalled its signature black pants for "increased sheerness." As the pants represented 17 percent of all Lululemon sales, the recall sent stocks tumbling.

"Lululemon's success has always been and will continue to be my highest priority," Chip Wilson said in a statement.

Within weeks of the incident, ​Lululemon chief product officer Sheree Waterson stepped down from her position; three months later, Day announced that she would be leaving the company as well.

When Wilson appeared on Bloomberg TV in November to defend the product that replaced the see-through pants, he created a new controversy by stating that the issue was with the consumer and not the product.

"It's really about the rubbing through the thighs, how much pressure is there over a period of time, how much they use it," Wilson said of the pants.

When asked if Wilson's statements implied that not all women can wear Lululemon yoga pants, he replied, "I think they can. I just think it's how you use them."

Lululemon just can't seem to catch a PR break these days. In Dallas, the NorthPark Center store caused an uproar with a window display declaring "We do partners yoga, not partners card" — an obvious reference to the Partners Card program of beloved Dallas charity Family Place.

In an effort at spin control, the retailer hinted at an existing relationship with the charity, which turned out to be false. Then, finally, to make real amends, Lululemon broke down and wrote Family Place a $10,000 check.

Apparently none the wiser from its Dallas window display debacle, An employee at a store in Bethesda, Maryland, thought it was a good idea to quote Wilson with this not-so-enticing message: "Cups of chai, apple pies, rubbing thighs?" The sign was promptly removed after customers complained on social media.

Though he's resigning from his post as chairman, Wilson will retain his position as a member of the board. His status will change prior to the company's annual meeting in June 2014. Michael Casey, currently lead director of the board of directors, has been named Lululemon's next chairman.

Lululemon founder Chip Wilson is stepping down from his position as chairman of the board. Photo courtesy of Lululemon

The yoga pant controversy was just one of several Lululemon PR nightmares in 2013. Lululemon Athletica/Flickr