New interactive map offers a glimpse into the Austin of 2030

New interactive map offers a glimpse into the Austin of 2030 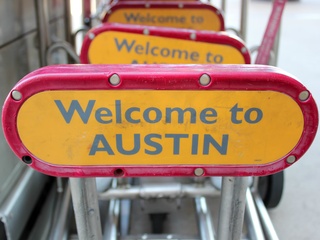 Austin is projected to add more than a million people by 2030. Erica Pallo/Flicrk

We all know Austin is growing (despite the fact that we're just so unhappy), but just how many people are projected to move here? Using historical trends and census data, the Urban Institute has mapped population projections for every metro area in the U.S. through 2030 — including Austin.

At an average rate of growth, Austin will see a 55 percent increase in population and almost a million new residents by 2030.

This new interactive tool was ultimately developed with urban planners and civic leaders in mind but offers everyone a fascinating glimpse into what the future could look like. Examining migration, race and age, the "Mapping America's Future" tool allows users to see these metrics based on low, average and accelerated rates of growth.

Regardless of the rate of growth, Austin is projected to continue its explosive population trend. An "average" rate will still include a 55 percent increase in Austin's population and the addition of almost a million new residents.

Based on the average, expect the Austinite of 2030 to be white or Hispanic (about 2.2 million) and young (more than 1.9 million people will be under the age of 49).

But what if we don't grow as fast as projected? What if migration slows? Or birth rates slow? The Urban Institute has considered these factors, too. Even with low migration, birth and death rates, Austin can still expect about a 40 percent increase in population, adding about 725,000 new people by 2030.

And what if growth accelerates? Factoring in accelerated rates of migration, birth and death rates, Austin could see an almost 70 percent increase in population, adding more than 1.2 million people to the metro area.