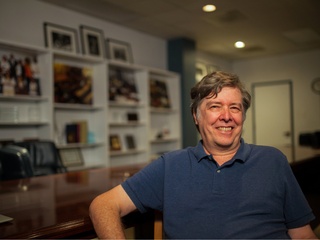 John Henneberger is the Austin-based co-director for the Texas Low Income Housing Information Service, an organization that works to empower low-income neighborhoods and solve development problems.

"My colleagues and I work with neighborhood leaders on the chronic shortage of affordable housing and the problems that result from persistent neighborhood segregation," said Henneberger in his MacArthur Foundation interview.

In addition to trying to solve Texas' persistent affordable housing shortage, Henneberger has also revolutionized housing efforts on a national scale. Following hurricanes Dolly and Ike, Henneberger was instrumental in streamlining the often disorganized — and slow — process of providing relief to victims. During his work helping Texans who suffered devastating loss during the hurricanes, Henneberger revolutionized how federal, state and local government responded to victims of natural disasters.

Writes the MacArthur Foundation, "Henneberger has a track record of negotiating seemingly small changes in state and local policies and housing practices that enjoy a broad consensus and significantly improve the supply of affordable housing and access to fair housing."

In an interview with ABC, Henneberger said he was so stunned after receiving the call that he had to sit down. "I got really quiet and they [the people he was with] were asking me, 'Did somebody die?'"

Along with 20 other recipients, Henneberger will receive $625,000, as well as the prestige that comes with joining an elite group of people that includes Eroll Morris, Susan Sontag, James Turrell and Junot Diaz, among others.