Freelancers forays into the shifting landscape of web series comedy

Freelancers forays into the shifting landscape of web series comedy 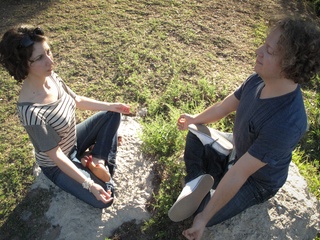 After two years of writing, filming and editing, two Austin comedians have emerged from the other side of creating a web series. Turns out, it's (usually) a lot more work than turning on a webcam and dancing to Beyonce in a wig.

Their final product, Freelancers, is an impressive six-episode arc of snappy five-minute pieces telling the story of two broke twenty-somethings struggling to make the rent for their (totally unnecessary) shared office space. Real life friends and comedians-in-arms, Erica Lies and Ted Meredith, play the title's freelancers with the deftness and honesty of two folks who know this life all too well.

Lies (a part of the sketch comedy team There's Waldo) and Meredith (from the writing and performance staff of Esther's Follies) sat down with us to discuss the development of their web series, the differences between their usual forms of comedy and the changing nature of today's web series.

CultureMap: Congrats on completing the first season of Freelancers. Tell us how this monumental project came about.

Erica Lies: Well, we met at the Institution Theater in one of Tom Booker’s improv classes. And I’d known Ted about a year, and by then we knew we had good chemistry together. We did this scene in class where I was a writer and he was a yoga instructor and we didn’t really do anything but we had a shared office space.

Ted Meredith: It was unusual because we were officemates; not roommates, not in a relationship. And it dawned on us after the scene that neither of these characters needs an office. And that was enough to give us the jump we needed.

EL: Ted said, “Y’know, those were great characters, I wish we could do more with them.” And I said, “Yeah, it would be the perfect premise for a web series.”

TM: It was literally while we were getting notes from Tom that we decided this should happen.

CM: You both have sketch and improv backgrounds. What is the difference between these and creating a sitcom?

EL: In improv or sketch, you can go a lot bigger because you only have to sustain it for five minutes. But with a connecting story, you have to balance the ability to stay consistently funny…

CM: So how many drafts do you go through for each episode?

TM: I don’t even know if that’s possible to count.

EL: We started writing the show in July 2009. Between then and December of 2009, we wrote 11 episodes. And after a staged reading of the first five episodes, we chucked everything and rewrote from scratch using the same characters and some plots.

CM: Did your vision of the scripts translate exactly into what you imagined in the final product?

TM: I’d say it turned into something better. Every character that we wrote got stronger and more enriched because we got funny actors to read for them.

EL: We also wrote specifically for several actors. We knew that Tom Booker would be our Francois, for example. And he brought so much more to it that we couldn’t have expected. It was like that with all of our other actors.

TM: Clarissa [played by Cami Alys, currently starring in the touring company of Rude Mech’s I’ve Never Been So Happy] was the only character we actually had people audition for. Cami fit the vision that we had of the character.

CM: Who wrote the awesome montage song “Inside Out Vagina” from the fifth episode?

EL: Ryan Thomas [of cover band After School Delight] wrote that song. He is hilarious and should be in more things. He’s playing every single instrument in the song.

TM: The song was a departure from what the rest of the show is. We gave ourselves permission to be a whole lot goofier with that montage. Instead of a three-episode arc, we realized how we could squeeze it down with a more ambitious approach.

EL: We figured if people have made it to the fifth episode, then we’ve earned that montage. We just needed to make sure we could produce it. And that’s all thanks to our original producer, Deana Ricks, and our Directors of Photography Erik Mauck and Chelsea Hernandez, who are all legitimate, real filmmakers.

CM: What are the web series that have influenced you? What are you all watching as inspiration?

TM: The Guild and We Need Girlfriends. This was a whole two and a half years ago, so this is when having a web series was a huge deal. If you had a successful web series, you were going to get a CBS sitcom out of it.

EL: I had seen a lot of The Burg when I lived in New York. And I saw a lot of Easy to Assemble, which is Illeana Douglas’ series that’s sponsored by IKEA. These happened in the time between when we were writing and editing. And during that time, the whole web series playing field flipped upside down. Look at Very Mary Kate—it’s super short and based on a super huge celebrity.

I would say more web series are more similar to sketch now; with the same familiar characters in different situations.

CM: How have web series changed over the course of your production?

TM:  When we started two years ago, the way people watched web series was by downloading them for free on iTunes. There wasn’t this easy access to streaming them everywhere. That’s probably why they’ve gotten shorter since then.

EL: I would say more web series are more similar to sketch now; with the same familiar characters in different situations. This will be probably what we’ll be doing going forward.

TM: Seeing our characters in different situations will fit that model better. We can still do arcs, but we’ll be able to now just shoot a blind date or a trip to the car mechanic, for example.

EL: We also haven’t explored their deep history or their dating lives. Origin stories are in the works. Explorations of how they got to the place where they are.

CM: So what’s next for Freelancers?

TM: So we’ve done our part. Now bring it on, trolls! (laughs) But, honestly, we’ve got something that we believe in. And people who see it like it. But we want to get it in front of other people who will like it, too.

EL: (speaking directly into the voice recorder:) We’re on the lookout for a producer to help us promote. Because we’re both balancing this with working our real jobs, ironically…