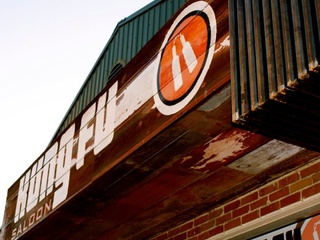 Kung Fu Saloon in Austin is at the center of a social media storm. Courtesy photo 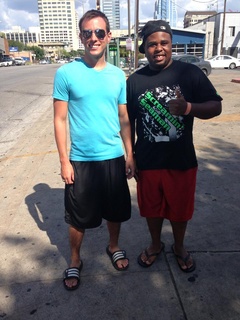 UPDATE: After this article was published, Kung Fu released an official statement regarding the incident. It has been added to the original story.

Two friends walk into a bar, and they're both wearing basketball shorts. Which one doesn't get in? The African-American guy.

According to Scott Hudnall, that's what happened on the afternoon of August 11, at Kung Fu Saloon on Rio Grande Street in Austin. And those actions set off a social media firestorm, with people leaving enraged comments about the bar on Facebook, Twitter and Yelp.

Hudnall says that two of his friends, Michael Frey and Stephen Robinson, tried to enter Kung Fu to join a group of friends, including Hudnall, who were already inside. Frey and Robinson approached the bouncer together. Both were wearing shorts that ended below the knee, a violation of Kung Fu's dress code.

Frey, who is white, was allowed to enter. Robinson, who is black and sported the same basketball shorts as his buddy, was not.

"The bouncer let some of the party in," Hudnall says. "And then he got to Stephen." Hudnall alleges that even after members of their party pointed out "four or five" additional patrons allowed in the bar who were wearing similar mesh shorts, the bouncer still refused entry.

"[The bouncer] said nothing about his T-shirt, hat or flip flops. This was just about shorts," Hudnall claims.

Another patron went to get a manager. "We pointed out that someone else was wearing the same shorts [as Robinson]," Hudnall says. "The manager just didn't seem to have anything to say."

Hudnall alleges the bouncer then said, "We just don't want to get a big ghetto population in this bar."

In the United States, any business can deny entrance or service to a potential patron, as long as that reason doesn't violate federal law (hence those "No Shirt, No Shoes, No Service" signs). But, according to the Department of Justice website, businesses cannot discriminate based on "race, color, religion or national origin," as protected under Title II of the Federal Civil Rights Act.

After Hudnall posted a photograph of Frey and Robinson on Facebook and Twitter, the social media controversy erupted on Kung Fu's social media pages. People chastised the arcade-themed bar for its treatment of Robinson. Some commenters, mostly young black men, have also commented with similar stories of being refused entry at Kung Fu and other West Sixth Street bars.

As if charges of systematic racial discrimination aren't enough, this bar's unwillingness to address those charges makes it worse. Its Facebook page is littered with accusations of discriminatory door policies. However, with a new charge going viral in the last 24 hours and a bunch of complaints about it on its Facebook wall, what did Kung Fu do with its social media? It posted a 'Mondays' joke.

Almost immediately after the storm erupted, the bar removed any negative statements from its Facebook page, including the "Monday joke."

On August 14, after this article was published, Kung Fu released this statement:

Management of Kung Fu Saloon is currently investigating a claim that an employee of the company made an inappropriate comment to a customer trying to gain entrance to the bar wearing unacceptable attire. Management will determine whether the comment was racially motivated and if so, appropriate disciplinary action will be taken.

Kung Fu Saloon is home to one of the most diverse crowds in the Austin bar scene – a reputation that we value and cultivate. It is not the policy of Kung Fu Saloon to deny any customer entry based on race or ethnicity.  Our aim, as always, is to continue to provide a fun, safe and welcoming atmosphere to anyone, in keeping with Kung Fu Saloon policies.

Kung Fu Saloon in Austin is at the center of a social media storm. Courtesy photo