Wine Talk
Wine tastings, lectures and tests: Entering the world of the sommelier

Carlos in the kitchen: Personal chef Carlos Crusco brings "dining out" in

Carlos in the kitchen: Personal chef Carlos Crusco brings "dining out" in 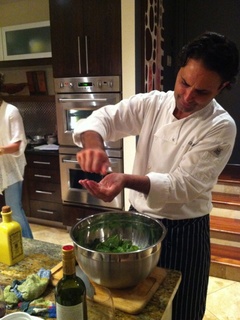 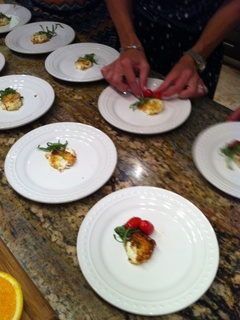 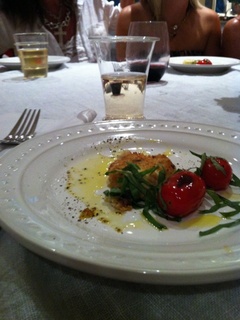 Love hosting dinner parties, but find you’re always putting them off because of the work involved? Why not alleviate the stress by having a private chef handle the cooking for you? Or better yet, host an at-home cooking class lead by a private chef?

You can have it either way from Chef Carlos Crusco, an Austin-based personal chef who helps set families up with healthy daily meals during the week, but also knows how to turn your kitchen into his own, in turn letting you host a no-muss, no-fuss dinner party in the comfort of your own home.

I first met Crusco earlier in the year when my husband and I were joining some friends at their downtown loft for a low-key evening. Our friends are parents of two young children, so my husband and I were expecting a few choice take-out pizzas with beer and wine. Instead, we were greeted by our friend Daron and a plate of fresh crab croquettes with a smoked almond-parsley sauce. His wife, Tracy had just finished putting the kids to bed and was pouring us each a glass of wine.

“We’ll sit down for dinner after we finish appetizers,” she said.

Their home smelled of sautéed onions, herbs and warm baked goods and my appetite was immediately piqued. But I was also bewildered by how we were going to have a sit-down dinner following these savory little treats when our hosts were cozying up on their living room couch, nowhere near the kitchen cooking our dinner.

A na tive of Argentina, Crusco’s cuisine is inspired by the same Italian, Spanish and French cultures that have influenced the South American country for more than a century.

That’s when I noticed a handsome man with wavy dark locks, deep brown eyes and a beguiling smile buzzing around their kitchen with effortless ease. At first I thought he was just another guest for dinner, but our friends soon introduced him as our chef for the evening, Carlos Crusco.

In truth, Crusco had been a friend of theirs for some time, but since this is what he does for a living, they were eager to have friends over for a nice relaxing evening and a delicious meal prepared by him.

The evening was fantastic. Not only did we get to catch up with our friends, who were able to sit down and relax with us, we also enjoyed a beautiful meal. A native of Argentina, Crusco’s cuisine is inspired by the same Italian, Spanish and French cultures that have influenced the South American country for more than a century.

That evening he made us a traditional Argentine meal with “humita,” a creamy gratin of caramelized onions, fresh grated corn and cream; homemade gnocchi with tomato-mascarpone sauce and perfectly roasted herb-Dijon rack of lamb with cauliflower puree.

“I learned how to cook from my parents,” said Crusco when asked about how he came into a career as a personal chef. “My mom was a great home cook, but my dad was classically trained in French cuisine. He would always cook for our big extended family and friends when I was growing up. And I loved being in the kitchen with him.”

That night I learned that not only does Crusco cook for intimate dinners such as the one we enjoyed, but also for larger catered parties, and private in-home cooking classes.

If you like to entertain at home, you know that organizing a menu and sourcing great ingredients can be half the battle. That’s just one more thing Crusco handles for you, whether for a private dinner or a cooking class. As you’re firming up your guest list, he works with you on an appropriate menu and a reasonable ingredients list to help arrive at a cost-per-person price range. (Private dinners can range anywhere from $50 to $120 depending on how many courses and if extra staff is needed.)

Inviting him to host a cooking class is about the same cost as a class at Central Market or Whole Foods with the added benefit of having your own home as the venue. (A note to the budget conscious: the savings on serving wine with dinner in your own home beats the price of a night out anywhere else downtown — unless of course your serving some obscure, high dollar cellar wines from your private collection.)

While I’d witnessed just how smooth and easy a private dinner from Crusco can be, I was curious how he handled himself as a cooking instructor. So, I joined him one night at the Lakeway home of Kim Harris who was hosting a girls' night out for a bunch of her friends, all of whom were mothers and/or career women looking for a relaxing evening. Kim is the sister of Kristy Dupree, one of Crusco’s regular clients.

“My friends and I love getting a cooking class together with Carlos,” says Dupree. “The tips I’ve learned from Carlos are invaluable. I never knew what ‘chiffonade’ meant or how to pit a peach, but now I don’t feel so intimidated by my own kitchen.”

And while the bubbly group of ladies filled their glasses with crisp summer white wine, Crusco finished arranging his mise-en-place in Harris’ kitchen before calling us all to gather around. He handed each of us a packet with the evenings’ menu as well as the recipes for each course.

Crusco split us up into teams of two and gave us each a recipe to work on. He taught us how to soak and prepare mussels, how to fry goat cheese coins without the cheese getting too gooey, and the difference between a shallot and a green onion — that’s right, not everyone knew there was a difference. And that’s the kind of thing Crusco loves to help people with.

“Carlos absolutely puts you to work,” says Dupree. “But he’s there alongside you the whole time and you can watch in on your friends as they’re preparing one of the courses for the night.”

Were there any mishaps? Sure. A few actually, including more than half of our tartlet crusts getting burned in the oven. Something Crusco handled with grace and good humor. With each finished course, Crusco had each team present their dish and talk about the ingredients they used before serving it to their friends.

“The best part is at the end of the night when you’ve realized that you’ve put together this amazing gourmet meal,” says Dupree. “It’s something I definitely couldn’t do without Carlos in the kitchen to guide me along, but it’s so fun to have a part in that.”

By the end of the evening we were all well served — both in delicious food and perhaps a little too much on wine. And what’s wrong with a few tasty bites and a few bottles of wine among friends? Especially when you’ve got a few cozy couches and a clean kitchen when it’s all said and done?

“I love the creativity I get to implement when creating a menu with someone for a private dinner or catered party, but for the cooking classes, more than anything, I love when they see how easy cooking can actually be,” says Crusco who teaches from ages eight and up. “When I see the light go off and the expression of ‘that's it, that's all you have to do?’ it makes me smile.”

Having seen Crusco in action both for a private dinner and for a cooking class, I look forward to participating in more low-key at-home events with him. In fact, I’m going to another one of his classes at a friend’s house this week.

He’s also toyed around with the idea of taking a group of people on a culinary and wine tour of Argentina. If he can pull that off as well as his in-home cooking gigs, I’ll be one of the first to sign up.