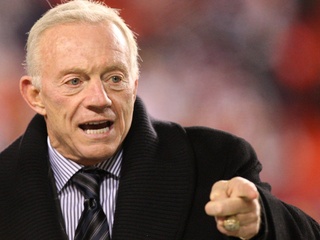 Jerry Jones is accused of sexually assaulting a woman in 2009. Cowboysfanrebellion.com 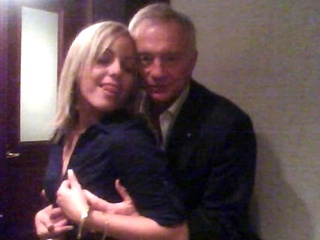 The woman who allegedly took these racy photos is now suing Jones for $1 million. Photo via Twitter

A 27-year-old Oklahoma woman is suing the Dallas Cowboys and owner Jerry Jones for sexual assault over a 2009 encounter that has already made national headlines. According to her attorney Thomas Bowers, Jana Weckerly was the person behind the camera when Jones posed provocatively with several women in an undisclosed Dallas hotel's bathroom.

When Weckerly resisted Jones' advances, Bowers alleges that the billionaire forced himself upon the young woman. The lawsuit, filed September 8 in Dallas County District Court, alleges that Jones penetrated Weckerly with his fingers, groped her breasts and buttocks, and made her watch another woman perform oral sex on him.

"Instead of reporting Jerry Jones' crimes, defendant Jerry Jones, Dallas Cowboys and other actors entered into an agreement to conceal this sexual assault," the lawsuit reads, alleging that the team and Jones intimidated Weckerly and told her to keep quiet "or else."

Jones' attorney Levi McCathern II characterized the lawsuit as an extortion attempt. "These allegations are completely false," McCathern said in a statement. "The legal complaint is unsupported by facts or evidence of any kind. This is nothing more than an attempt to embarrass and extort Jerry Jones."

In a statement, Bowers said that after the alleged assault, Jones' security guards picked up Weckerly and forcibly removed her from the club.

"Weckerly was humiliated, fearful and angry. No one challenged Jones and his disrespectful behavior. Weckerly cried and wondered how she could fight and win against a billionaire."

According to Bowers, Weckerly signed documents about the incident "against her will" and without access to legal counsel. "Jerry Jones and the Cowboys bullied plaintiff into believing that she would somehow be in trouble if she told anyone about the sexual assault," the lawsuit reads.

Weckerly is seeking damages in excess of $1 million. McCathern called the lawsuit "a shakedown" and said Bowers is "simply attempting to make a name for himself"

"We intend to vigorously contest this complaint and expect it will be shown for what it is — a shakedown," McCathern said. "Due to the seriousness of these baseless allegations, we have also involved law enforcement."

"The photos were a prelude to Jones' sexual, unwanted and illegal use of hands against Weckerly," Bowers said. "The new NFL personal conduct policy applies to NFL personnel. Does it also apply to owners?"

Jerry Jones is accused of sexually assaulting a woman in 2009. Cowboysfanrebellion.com