debate it
B.E.T.C.H. and the dirty word "Feminist"

Celebrity Artist Profile
'World of Maltzy': Daniel Maltzman is an accidental artist with not so accidental celebrity
LATEST NEWS
Long-awaited Dune is a visual splendor with a story stuck in sand
Cows Come Home 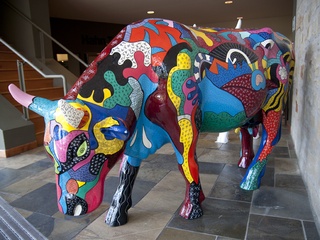 Austin's 2011 World Famous CowParade Austin herd is growing. Thursday morning, 25 more "art cows" will be milling about in our fair city. "Once in Blue Moo" will arrive at The Bob Bullock Texas History Museum, "Happy People" wanders to ABIA, "Cowjunto Music" will stand at Mexi-Carte Museum, "Night Mooves" goes to the Dell Jewish Community Center, "Tacow" will stand at Garrido's — these and 20 others will arrive overnight, joining their 25 friends already hanging out around town.

The herd will stay in place until being put up for auction October 30th at the Driskill. Proceeds of that auction will benefit the SuperHero Kids Fund of the Children’s Blood Disorder and Cancer Center at Dell Children’s Medical Center.

Editors Note — this updates a story we first published in July. Now back to our story...

First we got giant guitars, now Austin gets cows. Lots of them.

Wednesday, the 2011 CowParade revealed the first of 100 new "art cows" to be installed around the city later this month.

It's the first time this internationally recognized public art event arrives in Austin, joining an elite list of 75 cities in 30 countries benefitting from the philanthropically based sculptures.

Over 5,000 cows have been commissioned by global artists already and half a billion people have witnessed them worldwide.

CowParade takes their cows seriously, and who doesn't love cows? "Cows are a worldwide phenomenon that everyone can appreciate. Children recognize them immediately for their shape and size," said CowParade organizer Ron Fox at the unveiling. "Plus, their bodies make great canvases for artistic expression," he said without a hint of satirical humor.

A public unveiling of Austin's CowParade is set at 8:00pm on July 27 on the veranda of the Long Center for the Performing Arts. Afterward, the 100-lb. fiberglass cows will be set loose in public and private locations throughout Austin.

Like the 2006 Austin GuitarTown Project, these cows will be put up for auction at the Driskill Hotel in mid-October. It will likely be a lot less smelly than most cow auctions in Texas.

CowParade usually turns the auction proceeds over to children's charities and children's hospitals. This year, proceeds for the auctioned art bovines will go to a Dell Children's Medical Center fund called "Superhero Kids" benefitting the Children's Blood and Cancer Center of Central Texas.

True to Austin's nature, CowParade is getting a technological boost as well.

Local social media consultants 44Doors are installing QR codes onto each of the cows so smart phone users can learn more about each cow they encounter. And local social commerce consultants Bazaarvoice are enriching the CowParade website with artist, viewer and partner stories.

Lake Austin: Where one real estate pro is always at home
West Lake Hills: A life-long resident reveals his favorite spots
Four Points: An area expert sums up this quartet of neighborhoods