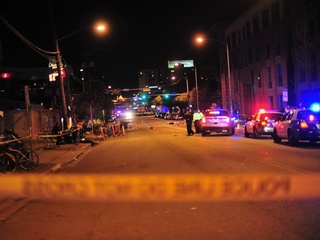 Scene of the horrific car crash on Red River Street that occurred during SXSW. Photo courtesy of KVUE News

KVUE has confirmed with University Medical Center Brackenridge that the victim is 26-year-old Sandy Le, an Austin resident. She was injured on Thursday, March 13 outside The Mohawk when Rashad Owens, 21, is said to have barreled into a crowd of festival-goers while fleeing from police.

Le was last listed in critical condition. Friends tell KVUE she was surrounded by her family when she passed away.

Austin resident Jamie West, 27, and Steven Craenmehr, 35, of Amsterdam, were killed. Twenty-two others were injured. Six people are still hospitalized. One person is in critical condition.

Rashad Owens, 21, has been charged with capital murder and aggravated assault with a motor vehicle. His bond has been set at $3 million. His blood alcohol level was .114 at the time.

Police say Craenmehr was on a bicycle, and West was on a moped with her husband. He remains in the hospital.