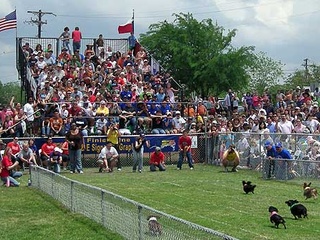 Every April in Buda, Texas — the "Wiener Dog Capital of Texas" — hundreds of Texans bring their beloved dachshunds to compete in a glorious contest of short-legged speed and highly customized beauty.

The Buda Wiener Dog Races & Lions Club Country Fair has become an annual tradition in Buda that draws good-natured dog lovers from across the state and combines expected hilarity with surprisingly genuine competition. Of course, it's the owners that get competitive; the dogs are just doing what they love: running and being the centers of attention.

Almost 15 years ago, Budan Diane Krejci approached the 30-member Lions Club with the suggestion for a dachshund race to help fundraise during the Buda Country Fair and Cookoff. What started as a humble, quirky idea now draws more than 400 racing dachshunds each year and twice as many humans, hungry for hot dogs and fast dogs.

For those who aren't familiar with the broad world of competitive wiener dogs, you've still got time to get caught up before the first gun goes off Saturday. Canadian director Shane MacDougall chronicles the whole amazing microcosm of dachshund racing in his 2004 documentary Wiener Takes All, which features all the pageantry of Toddlers & Tiaras alongside the heart-swelling thrills of Seabiscuit. Yeah, I said it: Seabiscuit.

But if you prefer your wiener races more local, you can turn to Austin director Elise Ballard, who made the Buda-focused doc, Lord of the Wiens. ("One wien to rule them all.") Ballard was married to former mayor Buda mayor John Trube, so it's a real insider's look at what makes this festival such a homegrown treat.

To give you a sense of what a true wiener dog champion looks like, you simply have to learn the tale of Copper, a sweet reddish-brown male who was born to run. Over the course of his career, he won every race between 2001 and 2007, except one in 2003. He truly was the fast and the furriest.

Upon retiring in 2007, Copper's coach, Brian Shocklee of Georgetown, finally admitted his training secret to the Hays Fre Press: "Yeah, we'd just go out and throw the ball around the yard." Amazing.

To find out who will be the next tiny wonder, you're invited to bring the whole family down to Buda to support the Lions Club and laugh your faces off. As long as you're not wierded out by their awkward body proportions or their subsequent troubles with the mechanics of racing, you're in for the

Dachsunds, start your engines, and may the best wiener win!