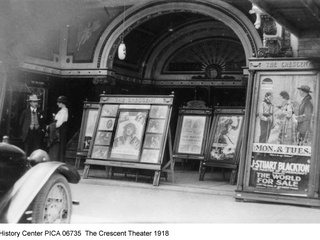 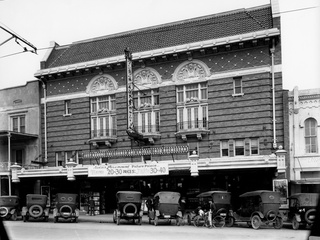 For more than 100 years, motion pictures have enlightened and entertained us. As important as the movies are, the places and spaces where we watch these movies are just as important to the experience. These spaces have changed and grown as cinema technology has changed, from the single person kinetoscopes to the 20+ screen megaplexes. The connection between cinema history and movie exhibition space is the topic of a new exhibit at the Austin History Center (AHC), “The First Picture Shows: Historic Austin Movie Houses.”

The first theater in Austin built to exclusively show movies was the Crescent Theater, built in 1913 at 920 Congress.

The first motion picture exhibition in Austin occurred on October 10, 1896, at the Hancock Opera House, just a few months after the premiere of Edison’s Vitascope at Koster and Bial’s Music Hall in New York. These early pictures were grainy and jumpy, and once the novelty wore off, few people showed interest.

Early films were sometimes called “chasers” because few people stayed for the movie, and theater managers used the films as a signal that the live show was over to “chase” the audience from the theater.

The business of showing movies became legitimate with the rise of the Nickelodeons (from the word “nickel” plus “odeon,” the Greek word for theater). They were multipurpose theaters, usually in converted storefront buildings, and consisted of a few rented or borrowed chairs, a white sheet hung along one wall, and a hand-cranked projector on a table.

Small theater ventures took over storefronts along Congress and 6th streets offering Austinites chances to see films. Austin was home to around 20 nickelodeons along 6th and Congress streets, notably the Yale, Casino, and Texas Theaters.

In the early 1910s, motion pictures evolved with more complex stories. As these longer narrative films were being made, the movie going public needed more comfortable spaces.

The first theater in Austin built to exclusively show movies was the Crescent Theater, built in 1913 at 920 Congress.

The Queen opened in 1921 by J. J. Hegman and was the first theater to have an electric light sign as well as the first to be wired for sound. It was designed by Walsh & Geisecke and cost over $200,000.

Austin’s first “movie palace” was the Majestic Theater, built in 1915 and now known as the Paramount. The Paramount Theater was built by Edgar Nalle and had its grand opening on October 11, 1915. It opened with vaudeville and movie offerings, though the original emphasis was on live performances.

In 1921, the Majestic was joined by the equally lavish Queen Theater across the street. The Queen opened in 1921 by J. J. Hegman and was the first theater to have an electric light sign as well as the first to be wired for sound. It was designed by Walsh & Geisecke and cost over $200,000. Hegman was involved in an infamous battle over Texas’ blue laws, which at the time forbade most commerce from occurring on Sundays. Angry that the law seemed to be turning a blind eye to other businesses, specifically drugstores and cigar shops operating illegally on Sundays, Hegman began to openly defy the Blue Laws by advertising Sunday shows. Eventually, all of Austin had to close on Sundays to ensure equal enforcement of the law.

The Golden Age of Cinema occurred in the 1930s, with Hollywood studios exacting strict control over film distribution, resulting in a corporatization of movie theaters. This manifested in Austin through the Dallas-based Interstate Theater Circuit (ITC), which in 1933 took over operations of the Paramount, Queen, Hancock (later renamed Capitol), and Texas Theaters.

Undaunted by the Great Depression, the ITC began a theater building boom, and over a few short years, added the State (1935), Varsity (1936), and Austin (1939) Theaters to the movie house landscape. Alongside the ITC were a number of independents, such as the Ritz on 6th Street, opened by Hegman in 1930, the Cactus (1939) on 6th Street, opened by Richard “Skinny” Pryor,  and the Harlem (1935) on 12th Street, a theater serving Austin’s African American community.

After World War II, the rise of the automobile culture created a new phenomenon, the Drive-In theater. The first drive-in theater was built in Camden, NJ and opened on June 6, 1933. The first in Austin (and Texas) was the North Austin, opening on November 18, 1940 at 6600 Dallas Highway (now Lamar). Eddie Joseph owned and operated the theater, and he also opened the Montopolis, South Austin, and Delwood drive-ins.

Drive-in theaters were a short-lived phenomenon. Their demise was caused by a combination of factors—the rise of VCRs, Daylight Savings Time, and the amount of real estate needed to run a drive-in versus running a multiplex.

In 1948, the Supreme Court Decision United States v Paramount drastically changed how films were exhibited. This decision forced a division between movie studios and the distribution of films, and studios could no longer own theaters to control film distribution. This opened the door to other corporate entities to run and build theaters.

The rise of the multiplex in the 1970s marked a shift of movie venues from the inner cities to the suburbs and shopping malls. As moviegoers flocked to the malls and multiplexes, the one screen movie houses faced a sharp decline. Some became art-house or adult theaters, such as the Texas Theater and the Austin (which became Cinema West). Some made alterations to try to compete, such as the Varsity. It added a second screen on the balcony, becoming a “twin” theater.

In 1993, there were 20 different theaters in Austin, with most of them being multiplexes or the newly created “megaplex” (16+ screen theaters). Only the Paramount, State, and Ritz theaters remain as movie houses in Austin from this bygone era.

The Austin History Center (AHC) presents The First Picture Shows, a discussion of the history of Austin movie theaters, based on the current exhibit at the AHC. The program takes place in the historic State Theater, now known as Stateside at the Paramount, 713 Congress Ave. on Tuesday, July 17 at 7:30 p.m. The theater doors will open to the public at 7 p.m.

To learn more about the story of Austin’s movie houses, come check out the exhibit, which runs through August 19. So how are we able to share this story with you? In addition to mining the rich collections at the AHC, such as the Paramount Theater Records (AR.2001.018) to find information and incredible visuals for our exhibits, we use the exhibits as a tool to add to our collections. Through the exhibit process, we added some significant collections to the AHC. Jay Podolnick, son of Lena and Earl, provided much from what he has saved from the Trans Texas theaters, now in the AHC as the Trans Texas Theater, Inc. Papers. Over the last few months, the AHC added donations from the grandson of J. J. Hegman, the son of Eddie Joseph, and projectionists Jim Malloy and John Stewart. These donations are hopefully only the beginning as we strive to document the history of Austin’s movie houses.

For more information about the exhibit or article, please contact Mike Miller at the Austin History Center.