Divorce Boot Camp: Session One
Divorce boot-camp: These boots are made for... 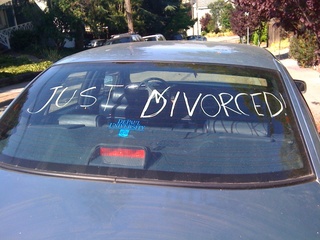 Divorce is not for weaklings. It's a grueling and stressful ordeal that can leave even the toughest contenders bruised and bloody. But luckily for you, there are people like me who have been through it before. Rather than watch you stumble around making unnecessary mistakes while you get the snot beaten out of you, I'm holding a Divorce Boot Camp for you instead. In three short sessions you will increase your skills and endurance so that you can make it through this challenge in one piece.

In Session One, we went over seven skills to get you in the best condition possible. Today's session is about protecting your reputation and managing your relationships with others. In Session Three, we'll cover how to choose a divorce lawyer and then get the most for your money.

Your kids don’t need to hear you rag on about their dad.  After all, they didn’t choose him, you did. And while you can divorce him, they can’t.

That quick review was the warm-up exercise. Now let’s get to the work out.

But if impulse control isn’t your thing or you’re the insecure type that can’t be alone even for the brief amount of time it takes for the wreckage of your last relationship to be towed off and the shattered glass to be swept away, at least have the good sense to keep your kids out of it. They have enough to sort through right now, so don’t add to the emotional chaos that they’re already experiencing by introducing them to your next Mr. Wrong. Trust me, there is a zero percent chance that mixing your love life together with your kids’ lives before your divorce is final will result in a smoother divorce--and there’s a bazillion percent chance that it will end up creating problems. So, do the math. A little restraint can have a huge pay-off.

If you have kids, it’s likely that some communication will be necessary. Whenever possible, limit these conversations to brief, vitriol-free emails—that way you have a written record of keeping him informed (which is the decent thing to do), and the emails can speak for themselves when it comes to content, timing and to a certain degree even tone.

Need to tell him about an upcoming school play? Do say, “Callie’s class play is at 7:00 p.m. on Thursday evening in the school auditorium.” Don’t say, “You may not be aware of this since you never bothered to spend any time at home while we were married, but you have a daughter.  Her name is Callie and she is eight years old and goes to Boone Elementary. She is in her class play this Thursday evening at 7:00. Normally, I wouldn’t expect that you would want to go since you never gave a rat’s ass about things like this before. But seeing as how you are now suddenly acting like you are the World’s Greatest Dad, and this is an event that will have a built-in audience, I figure this is exactly the type of thing you’ll want to show up for. Please note that she has been allergic to carnations since birth, so please ask your secretary to tell the florist not to include those in the gigantic bouquet that you are sure to bring to her at her performance and present to her when everyone is looking.”

That’s it for Session Two. Next week we’ll conclude with a session on choosing and working with your divorce lawyer. Until then remember this: Strong is the new sexy.