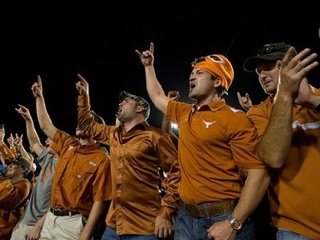 As any past, present or future Longhorn knows, UT students can party. They party at night, they party during the day (sometimes in Day-Glo outfits!), they party before football, after football, when it's warm out, they even party those few days in January when it's cold out. Longhorns can rage.

Well, the party gods have seen this hard work and on September 15 bestowed the ultimate honor. The University of Texas at Austin has been named Playboy's No. 9 top party school in the nation.

Deeming it "the longhorniest school" (and leaving us at CultureMap wondering why we've never thought of that hilarious pun), Playboy pays homage to UT's sprawling campus, Austin's penchant for hosting an insane number of festivals every year and the magic of Dirty Sixth Street.

We do take issue with one thing. "The quintessential spot is the Aquarium, where dancing on the bar is encouraged," the article says. Since we've been out of school too long to verify, we must trust that co-eds are in fact hanging out at Aquarium.

So raise a glass, Longhorns — and hook 'em.

Lock up a tour at the Brown County Museum of History in Brownwood
From bluebonnets to polka, celebrate big in festival-friendly Ennis
Morgan's Wonderland Camp makes the great outdoors accessible for everyone