Most Popular Stories
Where to buy in Austin, coffee shop with a view and more top stories 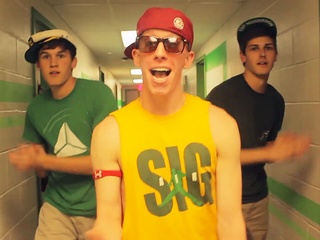 These guys know how to shake it off. Photo via YouTube

1. Even Taylor Swift loved this video of frat bros performing "Shake It Off." Taylor Swift has no time for haters, but she's got plenty of love for the lip-syncing bros of Delta Sigma Phi at one Kentucky university. The YouTube video had more than 3 million views before it was confusingly pulled for copyright claims. Swift, who sang and co-wrote the song, invited the frat boys to perform with her.

3. A GIF retrospective on Jimmy Fallon's 40th birthday. Although he's hit the big 4-0, Jimmy Fallon still has every bit of his boyish charm. Mashable takes a GIF walk down memory lane with some of Fallon's best characters through the years.

4. The first person to get an iPhone 6 in Australia dropped it. After camping out for more than a week to get the first iPhone 6, this guy let the magic slip right through his fingers and onto the pavement during a TV interview. It's further proof that sleep deprivation and Apple products do not mix.

5. Science shows liberals and conservatives smell differently. File this under awesome uses of scholarly research. A new study shows that "to a small but significant degree, people prefer the body odor of those who vote as they do."

These guys know how to shake it off. Photo via YouTube