The Irish know where they want to party, and it's Austin, of course

The Irish know where they want to party, and it's Austin, of course 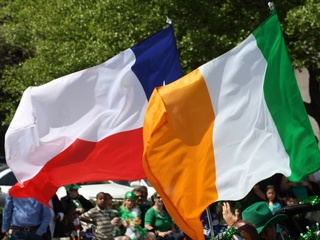 Ireland and Texas: A match made in heaven.  Photo by Kristy Fendley

Break out the whiskey: The Irish are coming. The Irish government has announced that it will be establishing a consulate in Austin, the country's first since the 1930s. Ireland will be only the second country to open an outpost in Austin, and the first European country to do so. (The Mexican government also has a consulate here.)

According to The Irish Times, the Irish government debated between Dallas, Houston and Austin, eventually selecting the Live Music Capital of the World because of our "vibrant life sciences industry and information, communications and technology sector, as well as being an entrepreneurial hub and the seat of government in Texas." (Note to Ireland: We also have breakfast tacos.)

"The feeling was that the fit was best with Austin in that it is a very fast-growing, future-focused, young city," says Ambassador Anne Anderson.

So what motivated the Emerald Isle to open its first consulate in almost a century? The Irish Times points to the impact of the economic crisis and the need to cultivate and attract savvy tech talent as key factors.

"The University of Texas in Austin and other colleges in the city draw thousands of students and have helped to fuel that creativity. The city has strong cultural foundations and is home to the South By Southwest music, film and technology festival, linking it neatly with Ireland," writes the Times. The newspaper also notes Texas' business-friendly environment and Austin's liberal reputation as deciding factors.

No word yet on where the consulate will officially open, but the Irish government does is looking at real estate in downtown Austin. Slainte y'all!