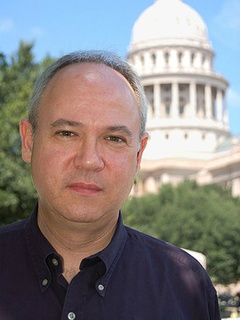 Casey Monahan has been the director of the Texas Music Office since 1990. Courtesy of Sig's Lagoon

News broke last week that Casey Monahan, director of the Texas Music Office, will not be retained under Gov.-elect Greg Abbot. But a new petition hopes to change that.

As the Austin American-Statesman reported, Monahan, who has been the director of the Texas Music Office since its inception in 1990, was informed by Abbot's team that his term will end next month. "They told me [last Monday] that my services weren't needed," Monahan told the Statesman. "They asked me to stay on until mid-February, which I was happy to do."

The news of Monahan's departure has shaken many in the Texas music industry, resulting in a petition calling for his reinstatement as the head of the Texas Music Office. "Mr. Monahan knows the pulse of the industry, knows the musicians, was formerly a music critic for the Austin American-Statesman and has championed the careers of many local musicians as well as the state of music and the music industry in Texas in general," the petition states. "His removal from the Texas Music Office, in our opinion, would be a mistake that would affect ourselves, the quality of music and the music business in Texas."

The petition was filed by Thomas Escalante on Saturday, January 10 on behalf of longtime Texas musician Glover Gill.

"The guy is known as 'Saint Casey,' and there's a reason for that," says Escalante, singer for The Suspects and owner of the Houston record shop Sig's Lagoon. "I've never heard one bad thing about the guy ... he treats everyone the same. And that is something that's rare in a government office."

Each year, the Texas Music Office assists more than 14,000 clients "ranging from a new band trying to make statewide business contacts to BBC journalists seeking information on Down South hip hop," says its website. During his tenure, Monahan has touched the lives and careers of many musicians and industry professionals, including The Suspects.

"One day, out of the blue, I get a call from Casey Monahan, who wanted to make sure that we were listed correctly in the TMO database," says Bill Grady, guitarist for The Suspects. "It was such an incredible confidence booster — we were legitimate all of the sudden."

Stories like Grady's are what make Monahan such a beloved figure in the Texas music community. "He certainly did us a solid, even if it was 20 years ago," says Grady. "I mean, come on! You're not gonna forget that."

Gill says Monahan has been his resource for years. "If I have a question, I can call him and he'll pick up the phone. He's never too busy to answer a question," Gill says. That caring nature is why he wanted to start the petition: not just to try to keep Monahan in office, but to let him know that his service has been appreciated. "I hope it makes him feel good," he says.

"Is the petition going to change anything? I don't know," remarks Escalante. But he reiterates that the main goal is letting Monahan know that the Texas music scene, from musicians to shop owners to fans, supports him.

The petition has already gained more than 1,450 signatures. As of press time, there were less than 50 signatures needed in order for it to be sent to Abbot's office. The office of Greg Abbott has not replied to CultureMap's requests for a statement.