V-Day Plans
Event roundup: What to do with your boo this Valentine's weekend 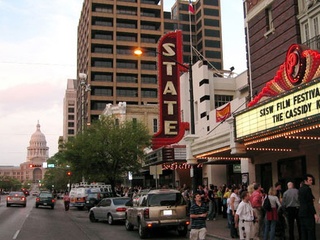 SXSW Film has officially released the 2015 movie lineup and it's filled with daring documentaries, inventive indies and big-budget Hollywood blockbusters.

Opening the festival is the world premiere of the documentary BRAND: A Second Coming, which chronicles the rise and fall, and subsequent rise again, of English comedian Russell Brand.

This year, SXSW culled 100 films for the festival out of 2,385 submissions, a number that, as IndieWire points out, rivals the Sundance Film Festival in terms of sheer volume.

Additional headlining films slated to make their world premieres in March are Ex Machina from writer Alex Garland, Get Hard starring Will Ferrell and Kevin Hart, Hello, My Name is Doris from director Michael Showalter, and documentary Steve Jobs: The Man in the Machine.

Festival films are divided into categories and include both the Narrative Feature Competition and the Documentary Feature Competition. Films are also classified into Headliners, Narrative Spotlight, Documentary Spotlight, Visions (unique and innovative films), Episodic (serialized television shows or webseries), 24 Beats Per Second (films focused on music and musicians), SXGlobal (international filmmakers) and Festival Favorites (buzzworthy films from other festivals).

In celebration of the film festival, SXSW will also host a series of special events including a sneak peek at Judd Apatow's latest film Trainwreck, starring Amy Schumer and Bill Hader; a special edition of Master Pancake with Doug Benson; and "Jonathan Demme Presents Made In Texas," which features six films made in Austin during the 1980s.

SXSW Film will run March 13-21 and will take place in venues around downtown Austin including The Paramount Theatre, Vimeo Theater at the Austin Convention Center, ZACH Topfer Theatre and the Alamo Drafthouse Ritz. Only SXSW Film, Gold and Platinum Badge holders are allowed entry, but if seats remain 15 minutes before showtime single-admission tickets will be sold for $10.

For a full list of films and events, go to SXSW.