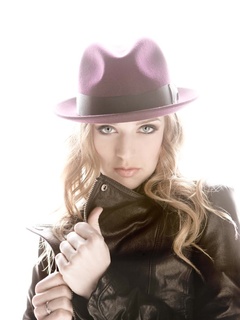 The recipe for ZZ Ward's unique musical blend is two parts blues, one part hip hop. The sultry, soulful singer made her SXSW debut this year in anticipation of the summer release of her first full-length CD.

Ward's edgy lyrics and unique sound have caught the attention of many in the music industry and created a buzz during SXSW. She was already named one of the Best New Artists in 2012 by Esquire.com, along with fellow SXSW performers Gary Clark Jr. and Alabama Shakes. In January, ZZ Ward dropped her mixtape, Eleven Roses, a set of blues-based interpretations of some of her favorite hip hop songs, including Tyler The Creator's "Yonkers."

She slowed down from her hectic SXSW performance schedule just long enough to speak with us about the evolution of her musical tastes and what she hopes to accomplish at the festival.

Ward says she was exposed to blues at an early age but her appreciation of the genre wasn't immediate. "I grew up with parents that listened to a lot of blues. A lot of Muddy Waters and Etta James. It wasn't something I was really into at first. I would steal my brother's rap CDs like Nas and Jay Z, and I kinda got into that. So I listened to hip hop first and then the blues started to grow on me. Now it's what I like to listen to and it's kind of what I am: this back porch bluesy kind of fusion thing."

When she was a girl in Oregon, her father wrote songs and played in a blues band. She says that's part of why she developed a love for songwriting. "[My dad] showed me it was ok to get up in front of a crowd and to not be scared to share your music and your lyrics with other people."

Ward also wrote or co-wrote all of the material on her new record. "Writing is interesting because I think that it's something you can never be fully sure of. It seems like every time I sit down to write another song, I think, 'I don't know if I can do this again.' But then it always happens. It's definitely the best way I can express myself, through writing."

The versatile performer spent a lot of time in Los Angeles listening rooms, trying to make a career in music happen. "I moved down to Los Angeles from Oregon two and a half years ago and I didn't have any backup plan. There was nothing else I wanted to do with my life so I knew I wanted to do music. I think when you really want to do something, you just have to do it and not have anything that's gonna get in your way."

In advance of her July CD release, she's touring to expose her music to as many people as possible. She had a packed performance and media calendar during her first visit to SXSW and hopes she leaves Austin with a few more fans.

"I want them to know that I'm a real artist," she says. "I don't know who I sound like or where I fit in, but I know that I'm being authentic to the music that I want to make. I hope that inspires people in whatever they're doing in their lives, and I hope they love the songs so they want to get the record."

You can get your hands on that ZZ Ward record when it's released on Boardwalk/Hollywood Records in July.

Leander: Space to spread out and its own vibrant downtown
Central Austin: A trio of historically elegant neighborhoods with lots of style
Bee Cave: A friendly Hill Country retreat where it's easy to 'bee' happy