Dating in the digital age
Sexting is riskier than you think: Sending nude pictures and racy texts ups the danger for teens 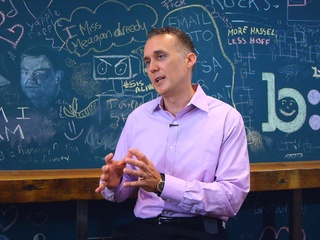 It all started with a baby stroller. A Peg Perego Pliko P3 Stroller, to be specific.

Brett Hurt, a new father and burgeoning entrepreneur, was reading an online product review of the stroller by a complete stranger in another part of the world and was so convinced by not only the product review — he bought the Pliko P3 — but also by the rhetorical impact and consumer capabilities of the online review format.

Today, Hurt is the CEO of Bazaarvoice, an Austin company that is redefining the way that retailers communicate with their customers largely based on consumer reviews like the one he found that night concerning his potential baby stroller.

To provide some context to the need that Bazaarvoice filled for the market, Hurt explains, "Just seven years ago, only three retailers had reviews on their site. Three."

Hurt was able to capitalize on that market niche and established his company as a product site that will honestly and happily go above and beyond for their clients. Seven years later, their clients include companies like Macy's, Infiniti, Schwan's and Bass Pro Shops, who all enjoy 24/7 coverage for their products and services.

"It's a pretty amazing ride to create a company seven years ago and already have it become a public company," states Hurt. Last quarter, the company's revenue was $31.4 million, which, as the CEO puts it, "is pretty substantial considering our young age as a company."

Achieving the status as an IPO so early out of the gate also allowed Bazaarvoice to acquire former competitors in the online review race, PowerReviews. Since then, the company has combined resources and doubled efforts across the country. "It's really cool to be playing on the same team now," Hurt says.

This fast growth and constant availability is a lot to ask of one's employees, and Hurt recognizes what kind of demand that puts on his team members. Therefore, he has emphasized from the beginning building a strong culture within the company as well.

For anyone who has visited the Bazaarvoice offices off Loop 360, you can attest to the friendly, communal nature of the campus. Break rooms include video game consoles, massage stations, movie theater seating and plenty of free food and drink in the kitchens.

"All I'm trying to do with culture is create an environment where it brings out the best in people," says Hurt. "We want our employees to bring their whole person into work, not just the work persona that says, 'Gosh, it's 5 o'clock... I can be myself again.' All that boils down to bringing out the best in people to drive the performance of the company."

Hurt views the company itself in terms of the human body, and nurturing the soul of the company is as much a priority as taking care of the head, the hands or the feet. Bazaarvoice's mission statement is "to change the world, one authentic conversation at a time." The CEO is a big believer in karma and seeks to better the company through community and global involvement. Generosity is even one of the company's core values.

The primary beneficiary for The Bazaarvoice Foundation is currently Breakthrough Austin, a local nonprofit that locates, funds and tracks low-income Austin students as they become first-generation college graduates. "We think that STEM is a big problem in this country," he states. "These children are ultimately going to create companies like Bazaarvoice in the future, but they have to get the education that matters."

Considering these young future business leaders, Hurt says he can still recall that feeling of trepidation before taking the leap to start the company from scratch in 2005. After all, seven years is not a long time when it comes to building a major national brand like Bazaarvoice.

"There's nothing harder than starting your own business for any career because you ultimately put your ego and everything out there," he reflects. "And if you fail, it's on you as the entrepreneur. That's liberating, empowering and exciting, but it's also incredibly scary too. It's very hard to get started, and you need to stand on the shoulders of many people that have gone before you."

Through those mentors, advisors and cheerleaders, Hurt formed his working definition of what it means to be an entrepreneur.

In his words, "It's someone who is persistent, driven, who has the humility to constantly ask for help and know that they can't do it all alone, who has the ability to rally people to the cause and be on that mission with them. And ultimately all of that results in a beautiful outcome where people have great jobs and you do this all over the world and create a really big impact on society."

Leander: Space to spread out and its own vibrant downtown
Zilker: Old Austin charm thrives amidst rapid redevelopment and popularity
Headwaters: Where the stars — and homes — are big and bright in Dripping Springs