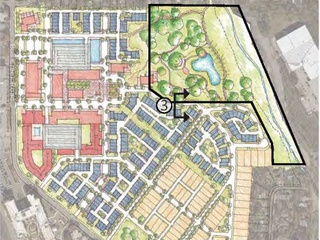 The field of grass and bluebonnets would be transformed into apartments and shops. The project would take several years and cost hundreds of millions of dollars.

Garrett Martin, president and CEO of MileStone Community Builders, said he and his development team want to preserve the area's nature while building the neighborhood, called The Grove at Shoal Creek.

"I've been coming here for years with my dogs and it's just a wonderful, wonderful park," said Suzanne McCurley, who lives in the neighborhood.

Martin said to satisfy neighbors like McCurley, they will keep a 12-acre park and four other 1-acre spaces throughout the community. "We really feel like understanding what the folks in the neighborhood want out of the project will enable us to deliver to them as much as we possibly can," Martin said.

The developer will also address traffic, which neighbors are worried about with more people and cars moving into the already congested area.

"We've spent an immense amount of time on traffic and really understanding the existing conditions so we can focus on any additional issues we might add by bringing additional traffic to the roadway networks surrounding the project," Martin said.

Martin said the team has identified critical intersections such as the main one at 45th Street and Bull Creek Road. He said they plan to fully fund improvements, like adding a lane to both streets.

"It sounds like they're really considering the people that come here, so I'm hoping that it will be sensitively done," McCurley said.

As of now, Martin said they don't know the number of housing units in the project, but a high estimate is a little more than 1,200 including spaces to buy and rent at a wide range of prices, a spectrum Martin said would include homes with a price tag starting at around $300,000 and going up into the millions.