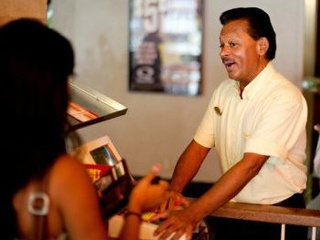 Wendy's cashier Junior was a UT icon from 1998-2014. Photo courtesy of GoFundMe

UPDATE: As of 8pm Friday, the GoFundMe campaign had raised more than $15,000.

If you're a University of Texas alum from the past decade or so, chances are you remember an unassuming hero from The Texas Union. Ishmael Mohammed Jr., known simply as "Junior" to hoards of Longhorns, was the beloved face of Wendy's — and the fastest cashier in the West.

Junior, who broke the world record for most sales in a fast food restaurant in under 30 minutes, worked at the University of Texas from 1998 - 2012. The subject of a SXSW documentary, Junior is in the spotlight again today, the subject of a GoFundMe campaign set up by a former UT student.

At 9 am on February 7, Benjamin McPhaul (data director at the Republican Party of Texas) started a campaign to "Help UT Wendy's Guy Get off the streets." "Last night, February [6th], 2014, my fiancee and I ran into Junior on the street near Campus," the campaign reads. "His mother passed away and left him homeless. This breaks my heart and I want to help, but I cant do it alone. Lets raise some money to get Junior back on his feet!! All proceeds will go towards getting Junior a place to live and a job."

Within hours of the campaign's launch, the $2,000 goal was exceeded; it more than doubled by 4 pm. "I ran into the guy last night, we were leaving a show on campus," McPhaul tells CultureMap. After recognizing Junior and offering him a ride, McPhaul made plans to do more. "I woke up this morning and said I want to do something for this guy."

It didn't take long for social media to take off and the fundraising to exceed all expectations. This afternoon, McPhaul has been emailing with Junior! The Wendy's Guy documentary filmmaker Stephen Stephanian, who also plans to help with the cause.

While the GoFundMe goal has been met, donations are still being accepted. Regarding the funds, McPhaul says he plans to work with a social worker and is looking into affordable housing options for Junior's future.