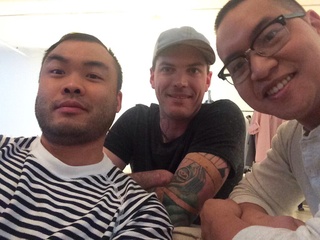 2014 is shaping up to be another stellar year for Austin's favorite celebrity chef, Paul Qui. No stranger to accolades, Qui finds himself in the national spotlight again with Food & Wine's Best New Chef announcement.

The 12 winners of the prestigious award were announced on Tuesday morning via Twitter, with a special Texas teaser from Editor in Chief Dana Cowin. "Hint: it's a big day for Texas," Cowin tweeted before unveiling the winners, each announcement accompanied by a selfie Instagram of the chef palling around with Cowin.

And the Texas contingency is strong: Qui is joined by Jason Yu of Oxheart in Houston and Matt McCallister of FT33 in Dallas.

The latest round of accolades is not to be confused with another Food & Wine endeavor, the People's Best New Chef contest, which launched on March 24. The poll, which was open to the public, also features Qui, Yu and McCallister (as well as a couple other hot Austin chefs) vying for the title of Best New Chef: Southwest.

Voting for that award closed on March 31, and the winner is expected to be announced on April 2. We'll take Cowin's tweet as an indication that one of these Lone Star chefs may be scooping up another Food & Wine victory very soon.

This is a preview of a published article: https://austin.culturemap.com/news/restaurants-bars/04-01-14-paul-qui-best-new-chef-by-food-wine-justin-yu-matt-mccallister/