Barbecue Coup
The best barbecue in the country is in Texas, of course
LATEST NEWS
Go on an artsy adventure in history-rich Mansfield
Kung Fu Faux Pas 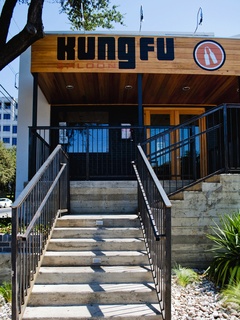 Kung Fu Saloon has been plagued by allegations of racism for years. Photo by Conner Howell 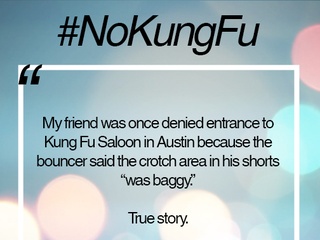 People who've been turned away from Kung Fu Saloon are sharing their stories of discrimination on social media. 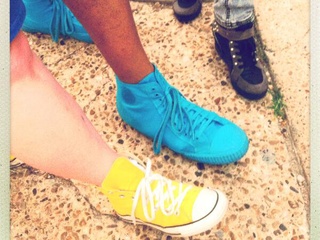 DeAndre Upshaw says he was told his blue high-tops were against Kung Fu Saloon's dress code but his white friends got in. 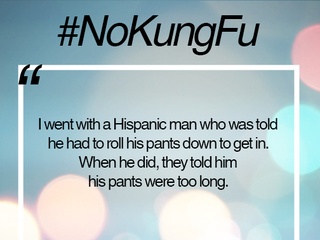 The alleged incidents involve a number of different races and items of clothing.

Reeling from yet another scandal over its door policies, Texas bar Kung Fu Saloon has at long last released its dress code, an object of mystery that has been requested by patrons many a time over the past few years.

Released on May 20, the dress code, which applies to all locations, lists nine bullet-point categories of unacceptable clothing that include baggy pants, "overly tight clothes," boxer shorts, sweat pants and pajamas.

Kung Fu Saloon has been repeatedly accused of racist door policies, including an incident last summer in Austin where Stephen Robinson was denied entry, allegedly on racist grounds. Most recently, 26-year-old DeAndre Upshaw said he was barred from entering the Uptown watering hole on May 18 because of his high-top sneakers. But high-top sneakers are not on the list.

"Even the dress code they've come up with now doesn't include the item I was turned away for," Upshaw says. "It's ridiculous."

The dress code does include a reference to discrimination. Kung Fu Saloon says it will not allow patrons inside the establishment who are wearing "items that promote discrimination or intolerance of any group based on race, religion or sexual orientation."

Upshaw contends that his dress code violation was not uniformly applied to all patrons, because several people wearing similar footwear were allowed inside without issue. The only difference is that they were white.
In a May 20 statement, Kung Fu Saloon said Upshaw's behavior is the reason the issue hasn't been resolved. "The customer refused to return, stated the previously mentioned claims, and the incident was unable to be resolved," the statement reads in part. Upshaw says he is more than willing to meet with Kung Fu representatives to discuss the issue.
"I would love to sit down with them and have a conversation," he says. Upshaw is using social media to shine a light on what he calls Kung Fu's pattern of "systematically discriminating against people of color." His actions have launched the hashtag #NoKungFuDallas, where other patrons are sharing stories of discrimination.


Kung Fu Saloon revealed its dress code only after being confronted with Dallas City Code, which states that unwritten rules of dress are illegal at public establishments.

Kung Fu Saloon, employees, and patrons are to present themselves in an appropriate manner which is conducive to a productive, safe and fun environment. Administration has the final authority about dress code compliance. In accordance with Kung Fu policies, employees and patrons may not wear:

• Improperly fit clothing; baggy pants, overly tight clothes, or clothes that expose body parts or undergarments.
• Boxer shorts, sweat pants, or athletic shorts
• Undergarments, pajamas or other clothing not designed to be worn as an outer garment
• Gang associated clothing or colors
• Emblems or writings that are obscene or that may reasonably be expected to cause a disruption of or interfere with normal operations
• Clothing advertising, condoning, depicting, or promoting a controlled substance, violence, or displaying vulgar or suggestive language
• Clothing or items that promote discrimination or intolerance of any group based on race, religion or sexual orientation
• Accessories, which are weapon-like, such as metal-studded collars and arm / wristbands
• Any item with graffiti including of backpacks and other items on the personage

Kung Fu Saloon has been plagued by allegations of racism for years. Photo by Conner Howell

People who've been turned away from Kung Fu Saloon are sharing their stories of discrimination on social media.

DeAndre Upshaw says he was told his blue high-tops were against Kung Fu Saloon's dress code but his white friends got in.