Dining Picks
Where to eat in December: Our recs include craft bars, authentic French and prix fixe picks

vegging out
Save a cow and crack a nut: How to shake the milk addiction and say no to sexy cheese
LATEST NEWS
Bodies Bodies Bodies hit the floor in hilarious horror comedy
the trailer food diaries

Baby it's cold outside: Trailer food to recreate inside

Baby it's cold outside: Trailer food to recreate inside 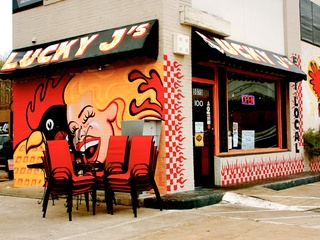 Jason Umlas of Lucky J's Chicken and Waffles stays true to his trailer roots, and also has a location that used to be a sandwich shop on Burnet and Hancock, right across the street from Billy’s. Photo by Tiffany Harelik

Recently I wrote an article about trailer food vendors that have opened brick and mortar restaurants. One of the entrepreneurs I highlighted was Jason Umlas of Lucky J’s Chicken and Waffles. He stays true to his trailer business, but also has a four-walled location that used to be a sandwich shop on Burnet and Hancock, right across the street from Billy’s.

Jason says the Ms. M is the most popular Lucky J's menu item — a boneless fried chicken strip with bacon and Swiss wrapped in a waffle. While the chicken and waffle tacos are what Lucky J’s is best known for, there are other delectable tacos (sans bird) on the menu that are worth checking out, including the Grandma Andy — a great kid-friendly option that would be easy to replicate at home: bananas, peanut butter, nutella and honey wrapped in a waffle.

I ordered the Squawk ‘n Cheese — a fried chicken tender over mac n’ cheese — as well as the fried green tomatoes (the tomatoes were only $3). If you go the classic chicken and waffles route, there are party pack options available. The Baller has eight pieces of chicken and four waffles for $15.99. Bigger party? Try the Shot Caller, which has twelve pieces of chicken, six waffles (and twenty inch blades?) for $19.99.

And for those home chefs, Jason contributed his Waffle Breakfast Tacos recipe to the Trailer Food Diaries Cookbook: Austin Edition. It's a great idea for a holiday morning meal that'll impress your guests with how Austin does breakfast.

‘Chicken for Strength, Waffles for Speed’ - is the tagline on Jason Umlas' food trailer.  However, after eating this version of breakfast tacos I’m afraid you’ll be ready for a nap.  Yield: 4 servings.

Combine ingredients and allow to sit for 15 minutes before using.

Heat oil to medium high and add potatoes and onions.  Sauté until the potatoes are crispy.  Drain any excess oil and toss with the seasonings.

Combine breakfast potatoes and bacon on a hot flattop or in a nonstick sauté pan over a medium high flame. Allow the contents of the pan to heat through thoroughly (about 1-2 minutes).  Add the eggs to the pan and stir occasionally so that the eggs scramble slightly.  In the meantime, place a slice of cheddar cheese on each waffle. When the eggs are thoroughly cooked (about 4 minutes or until there is no runny parts visible), divide into four parts and place in the center of each waffle. Fold the waffles and serve.

Jason Umlas of Lucky J's Chicken and Waffles stays true to his trailer roots, and also has a location that used to be a sandwich shop on Burnet and Hancock, right across the street from Billy’s. Photo by Tiffany Harelik