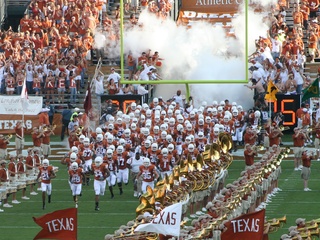 Editor's note: This story has been updated as more information has become available.

Two University of Texas football players, Kendall Sanders and Montrel Meander, have been charged with sexual assault according to the Austin American-Statesman.

The incident allegedly took place in Meander's room in the San Jacinto Residence Hall on the UT campus on the night of June 20. According to the Statesman's sources, the Longhorn football players allegedly met the victim on Sixth Street before returning to the dorm. UT Police took a report of a sexual assault the next morning at 3:43 am, but it is unclear clear if it's the incident in question. A synopsis of the incident according to police reports can be found on KVUE.

In the early morning hours of July 24, both men were charged with sexual assault. Sanders will face an additional charge of improper photography, which is also a felony.

Sanders is third-year wide receiver who has played 23 games with seven starts. Meander, who is heading into his sophomore year and is also a wide receiver, did not play last year.

The two men were arrested this morning and released on a personal recognizance bond. Coach Charlie Strong has suspended both players indefinitely.