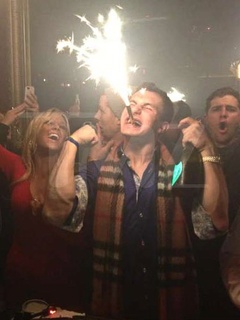 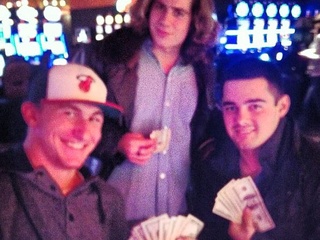 After posting this on Instagram, Manziel tweeted, "Nothing illegal about being 18+ in a casino and winning money...KEEP HATING!" Johnny Manziel/Twitter

To say that Johnny Manziel has had an impressive year would be an understatement. Beginning the 2012 season — Texas A&M University's first in the SEC — as a redshirt freshman, the 20-year-old quarterback quickly earned the nickname "Johnny Football," led the Aggies to an upset of No. 1 Alabama and a Cotton Bowl romp over Oklahoma, and became the first freshman to win the Heisman Trophy.

After a hard-fought season, you'd think that the guy deserves to have a drink without drawing scrutiny.

But on Sunday, TMZ published photos snapped of Manziel post-OU win, a Burberry scarf around his neck, a sparkler in one hand and a bottle of Dom Pérignon in the other. As the gossip rag writes, "Manziel hit up Avenu Lounge in Dallas and as you can see in the pics . . . he rather enjoyed himself."

"It's tough knowing that everything you do is watched pretty closely because I'm doing the same stuff I've always done. It's just now people actually care what I do," Manziel told reporters on Sunday.

Among the things that people have cared about include fraternizing with scantily-clad coeds at a Halloween party, scoring courtside seats to a Dallas Mavericks game and winning big at a casino.

"I'm still the same small town guy I've always been," said Manziel, who grew up in Kerrville. "For people to recognize me everywhere I go now and how much notoriety comes along with this, it's been beyond my wildest imagination."