Driven To Help
Is Gabrielle Giffords planning another run for office? Husband hints at future plans 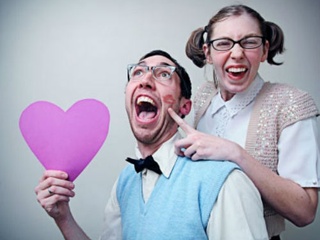 Speed-dating has gotten a bad rap from the movie industry. Often portrayed as a far, desperate step below online dating, movies tend to populate their speed dating pools with every shade of neuroses played to comic effect.

But for those who have participated in one of these events, you can attest that you're far more likely to find normal people like yourself, sick of waiting around for "the one" to come along, and willing to get creative in their dating approaches. It's especially helpful when the speed-dating event is themed as to unite everyone with common talking points with potential dates.

Following this reasoning, the braniacs behind the international monthly geekfest Nerd Nite created their own form of nerd speed dating to help the shy and socially-awkward among our ranks put their best brains forward in a setting that celebrates cerebral attributions. Started at Nerd Nite New York in 2006, the popular mixers have become a monthly staple at a third of the 30 Nerd Nite sites around the world.

If you're tired of the same old dating game, Speed-Friending might be exactly what you're looking for. If nothing else, you might meet a new drinking buddy with whom to enjoy upcoming shows.

"[Nerd speed dating] really started because people at our shows kept asking me every night if I knew anyone at the show who was single," says Nerd Nite NYC "Boss," Matt Wasowski. "After happening about four or five times, I realize this could be a real thing. I sent out the interest sheet to about 1,000 people on our listserv; and within an hour, the whole thing was sold out. We regularly sell out every month within 24 hours."

According to Wasowski, who has now seen quite a lot of love connections over the years, the speed-dating formula is really nothing more than a numbers game. "You still need at least 10 - 15 potential mates for each participant to make it worth everyone's while," he says. "That's true for both hetero and same-sex speed dating." (Sorry, there's still no actual mathematical formula for dating success yet. Apparently, chemistry still plays a role in the process.)

In Austin, our hugely popular Nerd Nite has rebranded their monthly mixers as "Speed-Friending" to reduce the amount of pressure put on each of the potential dates. Amy Cavender, long time attendee of Nerd Nite Austin, is the new mistress of love, coordinating the meet-up prior to the monthly show in the venue's side bar, The North Door.

Cavender has been brainstorming ways to make Speed-Friending even more accessible and more exciting for curious boy nerds and lady nerds. "For the upcoming event, we have reduced the number of slots, adjusted the ticket prices for men and women, and moved it to a more comfortable area within the venue. I am also going to try to get the results of the event out faster. I participated in speed-dating a couple of times, and I found it a little awkward to make eye contact with people I had just 'dated' at the event afterward, because I wasn't sure if the ones I was drawn to were into me, and vice versa," she says.

Another new element to Nerd Nite's international love connection efforts are personal profiles in their new Nerd Nite Magazine. In addition to the printed versions of several of the best lectures from Nerd Nites around the world, interested and daring nerds can submit their profiles and be seen by nerds on the other side of the globe.

"We have done 30 profiles so far since the magazine launched [in January], and we're just now getting feedback. And it's from all over the world," says Wasowski, who heads up a team in New York to determine who gets profiled. "People in Germany and Sweden are reading about people in the U.S. and making contact that way. I know someone from Austin has been doing quite well in the response department, largely because of her creative profile picture."

Whatever your mode of meeting your fellow nerds, there's no denying the irresistible draw towards a sexy guy or gal with a good head on their shoulders. If you're tired of the same old dating game, Speed-Friending might be exactly what you're looking for. If nothing else, you might meet a new drinking buddy with whom to enjoy upcoming shows.

Nerd Nite Austin celebrates multimedia expression in their latest show, Nerd Nite 35: Mixed Media, this Wednesday at the ND@501 Studios at 7:30 pm. This month's presenters are neuroscientist Cynthia Phelps, photographer Bruce Leander and Intergalactic Nemesis creator Jason Neulander. Speed-Friending starts an hour prior, and requires an RSVP before the event.