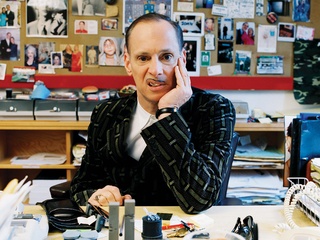 Last week I shared with you my favorite holiday read. This week, I want to hip you to my favorite Christmas album, a compilation of holiday songs spanning several musical styles including doo-wop, cocktail, Motown, rockabilly, and Chipmunk, with lyrics that are often awkward, sometimes pious, mostly hilarious, and occasionally arousing. Yes, Virginia, there is A John Waters Christmas.

The Pope of Trash

That's the reaction I usually get when I ask someone if they've heard A John Waters Christmas. John Waters’ films, like the gross-out classic Pink Flamingos, still have the ability to freak out even the most jaded of audiences, while his more mainstream works like Hairspray are a part of the vernacular of pop culture.

Leave it to Waters to remind us that Christmas in the 21st century just isn’t Christmas without a healthy dose of guilt, self-flagellation, and cutesy kids' voices.

Waters’ influence as an artist is pervasive. “Long before I had access to his work, a weirdo kid at school had a copy of (Waters') screenplays in book form called Shock Value,” says Houston filmmaker Stephanie St. Sanchez. “I remember reading them and thinking, ‘Wow! How did he get away with this?’ Two weeks later, I attempted to make one of my first films.”

Contemporary Art Museum Houston director Bill Arning describes Waters as “the arbiter of all things cool." But surprisingly, the artist once dubbed "The Pope of Trash" now finds himself teaching film and subculture in universities and responsible for a successful Broadway musical turned into a PG flick you can take the kids to.

“It’s great. It’s the final irony in my life,” Waters said in a recent interview regarding his success in the mainstream. “I think we need a new vocabulary, because [now] everybody wants to be an outsider. When I was one, no one wanted to be one.”

So imagine it's early evening and we have gathered in a nice house in a nice neighborhood for yet another holiday party. Maybe the guests don’t know each other all that well, maybe they’re just there to be polite or finally get back that damn Weed Wacker that you borrowed several months ago. Maybe one or two don't even....you know... (whispering) celebrate Christmas. But the hosts are gracious, the booze is plentiful, and some twisted soul decides to pop in A John Waters Christmas.

(Spoiler alert! Stop reading if you want to buy the CD and be truly be surprised!)

First track is “Fat Daddy” featuring Baltimore R&B DJ Fat Daddy who sort of half sings, half raps this song of his bad self in the guise of a “Santa Claus with soul.” The falsetto “La, la, la, la, la…” back up vocals are a hoot. Singing along is a great way to warm up your voice for Tiny Tim who on track two croons in his inimitable style the classic, “Rudolph the Red Nosed Reindeer.” Everyone at the party is loosening up, trying to hit those high notes.

At this point, at least one set of parents have phoned their babysitter with a request to wake up the kids so that they can confess to them what terrible parents they are. Single or childless folks are drinking then spitting eggnog at each other’s faces. Things are getting out of hand. But without warning, the party suddenly grinds to a pious halt thanks to track four featuring 5- or 6-year-old Little Cindy and her spoken-word performance, “Happy Birthday Jesus (A Child’s Prayer).”

Leave it to Waters to remind us that Christmas in the 21st century just isn’t Christmas without a healthy dose of guilt, self-flagellation, and cutesy kids' voices. But, as Waters reassuringly writes in the album’s liner notes, “Little Cindy regrets nothing and neither should you.”

Next up is “Here Comes Fatty Claus,” where a chorus of wandering minstrels aka “extreme white people” snarl and bitch at the top of their lungs about being in broke and in debt, thanks to the societal pressure to buy annually a bunch of disposable junk. The coda to this hooligan rant includes an additional helium-huffing back-up singer whose vocals pay homage to a certain trio of rodents appearing later on in the program. Everyone at the party is hollering along at the top of their lungs.

However, the pendulum swings Poe-like once again towards buzz kill thanks to a hokey song-story "Little Mary Christmas" intoned with dopey sincerity by MC Roger Christian. His monologue with music describes the plight of a crippled, orphaned girl at Christmas time. At this point, the party guests are fighting each other to get to the toilet or bawling their eyes out. How do we get this party back on track?

Carole King wrote a ton of great songs. “I Wish You A Merry Christmas” isn’t one of them. But the performance by Big Dee Irwin and Little “Do The Locomotion” Eva is killing, so who cares? It’s a great Motown-inspired stomp and you definitely can dance to it.

Next up, “Santa Don’t Pass Me By,” a somewhat odd, even confusing piece of rockabilly supposedly (but probably not) written by infamous Sugar Hill Studios owner Huey P. Meux (Yes, Virginia, that Huey P. Meux.), and sung by troubled soul Jimmy Donley.

From here on out, things are a bit of a blur for the partygoers. People are forgetting how much they’ve had to drink, who is married to whom, and what native language they speak. Alvin and the Chipmunks, the late great Rita Faye Wilson, and zombie hipster cocktail band The Coctails (with musical saw as their lead instrument) are all a part of the ensuing Xmas mash-up. Finally, Akim and the Teddy Vann Production Company wrap things up with the endearing Kwanza carol, “Santa Claus is a Black Man.”

Can you dig it? Outta sight! Now for God's sake, call a cab or have a designated driver to drive you home!

Very special thanks to Stephanie St. Sanchez and Bill Arning for their quotes. And please visit Houston's SuperHappyFunLand (Home of the Scary Santa photographed for this column.)