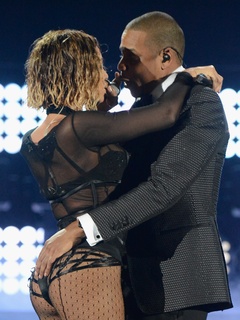 Beyoncé and Jay Z's steamy performance at the Grammys. Cambio.com

1. Grandmothers read lyrics to "Drunk In Love." Just when we thought Beyoncé and Jay Z's version of "Drunk In Love" at the Grammys was the most entertaining version of the song possible, a geriatric trio outdoes the power couple.

2. Southern California news anchors dive for cover as quake shakes LA. Even for seasoned Californians, earthquakes are downright scary. These two news anchors were on live TV when the studio started to shake. After a momentary pause, the reporters dive under their desk to wait out the quake.

3. New first kiss video shows the meaning of awkward — and it's perfect. Movies make first kisses look so sexy that it's easy to forget how downright awkward that initial liplock can be. This video from Hye Yun Park doesn't hide the clumsy nature of first kisses. It celebrates it.

4. Jenny McCarthy gets a dose of her own anti-medicine on Twitter. The anti-vaccination crowd is dwindling these days, and not just because of a renewed outbreak of whooping cough. Vocal vaccination opponent (and former Playboy model) Jenny McCarthy is one of the few holdouts. As Slate reports, the Internet is shaming her "dangerous anti-vax nonsense."

5. Watch as 1,000 years of European borders change. Russia's latest actions in Crimea prove that borders aren't written in stone. This entrancing video represents 1,000 years of war and conflict in Europe, though it's likely already outdated.