Stars of Trainwreck discuss one of SXSW's buzziest, raunchiest films

Stars of Trainwreck discuss one of SXSW's buzziest, raunchiest films 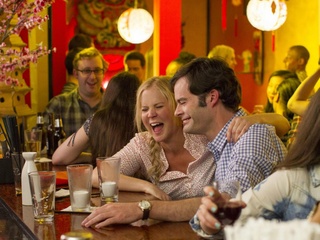 Amy Schumer is known for her raunchy stand-up comedy and hilarious Comedy Central television show, but she can now add successful screenwriter and film star to her résumé.

The upcoming movie Trainwreck — written by Schumer and directed by Judd Apatow — premiered at SXSW Film on Sunday evening. The film features Schumer as the main character who believes that monogamy is a fairytale until she falls for Dr. Aaron Connors, played by Saturday Night Live alum Bill Hader.

Ahead of the premiere, CultureMap caught up with the stars and director of the film.

"It's a really personal movie," Schumer tells CultureMap. The sexual adventures throughout the flick are largely based on true encounters from Schumer's past. "I mean, letting myself be that vulnerable? Airing all my shit?"

SXSW was treated to a rough cut of Trainwreck, and the team says the audience could not have been a better fit. "It just feels like a festival that's like your friends," Apatow says. "Everybody here feels like the type of people that worked on our movie. They're very appreciative of our style and no one is holding back."

The film and its ensemble cast have received a lot of buzz from festival-goers. Tilda Swinton, Colin Quinn, Mike Birbiglia and Lebron James play important roles, with several other cameos peppered throughout the film.