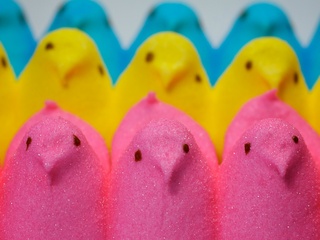 1. Watch a bunch of Corgis race to decide the name of the new royal baby. Betting site Ladbrokes brought together 10 Corgis to determine what William and Kate will name their second child when it arrives next month. Corgi races should determine everything.

2. Taco Bell is changing up its breakfast game with a new Biscuit Taco, which is really just a lame attempt at re-creating the magic of Whataburger's HBCB, and damn this obvious theft has got me heated. Just bring the Volcano Taco back, and we'll be good.

3. Here are 20 delicious facts on Peeps, because Easter is almost here. Now, I'm not saying Jesus would pass over some Peeps, but nobody with those kind of abs is binging on marshmallows coated in sugar.

4. A 3-year-old learns that she's going to be a big sister and has a unique response. BuzzFeed says that the response is "inappropriate," but this is my go-to move for pretty much all news. I'm just waiting for the Slate thinkpiece describing the video as "problematic."

5. This guy was kicked off a Southwest flight for wearing a vulgar Broad City T-shirt during a layover in St. Louis on the way to Chicago from Dallas. Good for you, Brooklyn guy leaving SXSW. Fight for your right to wear that free T-shirt that the world's sixth-largest broadcasting and cable company gave you so that you could be a walking billboard for the product.