The Week in TV
What to watch (and not watch) this week in TV: The Americans, Do No Harm and more
LATEST NEWS
Austin's Blanton Museum of Art wins NEH grant for upcoming exhibition
Sundance Film Festival 2013

Michael B. Jordan is riveting in Fruitvale, the hit of Sundance this year. Photo by Rachel Morrison

Ashton Kutcher is not terribly convincing as Steve Jobs in jOBS. Photo by Glen Wilson 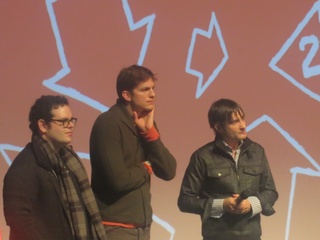 In the closing days of the Sundance Film Festival, several films with big names and big themes based on real-life individuals captured the attention of filmgoers and critics. Some are sure to be among the favorites at next year's Oscars. Let the race begin.

Lovelace
Earlier this week, an excited crowd gathered at the 1,270-seat Eccles Theatre (the largest venue at Sundance) for the first viewing of Lovelace, starring Amanda Seyfried as Linda Borman and Peter Sarsgaard as her abusive husband, Chuck Marciano.

The Weinstein Company's RADiUS has acquired Lovelace, which it will release in theaters and on-demand later this year.

Fruitvale
Ryan Coogler’s debut film Fruitvale has been the talk of Sundance. And rightly so.

It tells the true story of 22-year-old Oscar Grant, a Bay Area resident who was shot and killed by a police officer at the Fruitvale BART station on New Year’s Day in 2009 in Oakland. Grant was unarmed, handcuffed and face down on the ground when a police officer shot him in the back. The incident was captured on numerous cell phones and went viral online, sparking protests and riots throughout the city.

Although the audience learns in the first 30 seconds how the film will end, Fruitvale is nonetheless a riveting and powerful film that will be talked about long after Sundance ends.

Fruitvale begins with footage showing the shooting and then flashes back to the last day in Grant's life. Part con artist, devoted father and son, and loving (if philandering) boyfriend, he is basically a kid from the poor side of Oakland with limited resources and opportunities.

Although the audience learns in the first 30 seconds how the film will end, Fruitvale is nonetheless a riveting and powerful film that will be talked about long after Sundance ends. It is already getting buzz as an Oscar favorite a year from now.

Director Coogler, only 26 years old, is a resident of Oakland and a graduate of the University of Southern California’s filmmaking school. After directing a short film, he came to the attention of Oscar winner Forest Whitaker, who agreed to produce the film.

Interestingly enough, BART authorities allowed him to shoot the film at the Fruitvale station. It was the subject of a heated bidding war among studios, with The Weinstein Co. prevailing. No release date has been announced.

jOBS
The long-awaited biopic on Apple founder Steve Jobs drew a lot of attention as the closing film of the Sundance Film Festival Friday night to a sellout, waiting-list crowd. Directed by Joshua Michael Stern, jOBS follows the Apple founder from 1971 (the year he met Apple co-founder Steve Wozniak) through 2001 (the year the iPod was released).

The film opens as Jobs introduces the iPod and then flashes back to his college days — and off we go.

Steve Jobs is painted as a jerk whose anger is bubbling just beneath the surface. He yells. A lot.

Ashton Kutcher, who plays the title character, looks eerily similar to the early pictures of Steve Jobs, and the set designs are spot on for authenticity of that era.  It is a big role for Kutcher, who appears in every scene of the film.

The rest of the cast — Dermot Mulroney, Matthew Modine, Lukas Haas and J.K. Simmons — are one-dimensional with the exception of Josh Gad, as Wozniak, who gives his character some emotional depth.

Unfortunately jOBS tries to do too much and cover too many events without giving them much context. The film provides a light history of the personal computer and contains a lot of computer jargon. Jobs is painted as a jerk whose anger is bubbling just beneath the surface. He yells. A lot. And when he yells, it made me realize that Kutcher is not that great of an actor because it seems like Ashton Kutcher is yelling rather than Steve Jobs.

Along with the yelling comes incessant, loud and annoying music. Surely they aren’t releasing a CD to go with the movie? If so, it is not very good.

If you look at jOBS as entertainment, it will satisfy. But my guess is that Apple fans will be disappointed. (Wozniak has already told The Huffington Post that the movie is "embarrassing" and not accurate.)

In the Q&A Kutcher, was asked how he related to the character. “We both believe we can sell anything," he replied. "He failed and got back on the horse. I think we can all relate to that.”

Kutcher seemed emotional when he said that taking this role was the most terrifying thing he has ever done because he admired Jobs so much.

Director Joshua Michael Stern said, “This was a hard movie to make. Our job was not to answer every question but to portray the essence of the man. Ashton did that.”

You can judge for yourself, as jOBs opens nationwide on April 19.

Michael B. Jordan is riveting in Fruitvale, the hit of Sundance this year. Photo by Rachel Morrison

Ashton Kutcher is not terribly convincing as Steve Jobs in jOBS. Photo by Glen Wilson