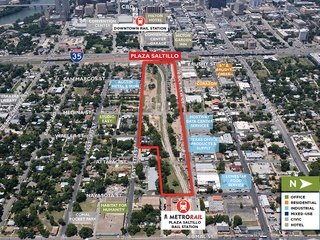 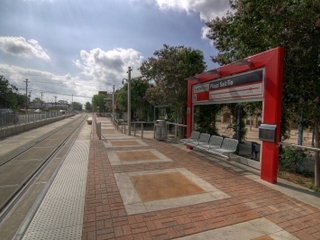 And then there was one. Competition for the redevelopment of East Austin’s Saltillo Plaza came to a somewhat stormy conclusion on Monday night with the Capital Metro Board voting to select the proposal by Endeavor Real Estate and Columbus Realty to redevelop the 10-acre space.

In May, Capital Metro narrowed the choices down to Endeavor’s proposal and a plan by Saltillo Collaborative, an affiliation of various companies led by Austin developers Perry Lorenz and Larry Warshaw, the Trammel Crow Company and the Guadalupe Neighborhood Development Corporation. Endeavor is the developer of The Domain, and Columbus is a major developer of residential units within The Domain.

Many east side neighborhood groups opposed the Endeavor plan, which called for more dense residential development, but Capital Metro’s stated goals were to maximize use of the inner-urban site. Board members said it was a difficult choice, and the vote remained deadlocked at 4-4 until a final changed vote resulted in a 5-3 vote for Endeavor, the choice that Capital Metro staff had recommended. On Monday night Saltillo Collaborative indicated that it will not continue negotiations with Capital Metro, thereby ending the selection process.

The Endeavor plan proposes approximately 800 residential units and a grocery store along I-35.

The Endeavor plan, designed by local architect Michael Hsu, proposes approximately 800 residential units (200 of which will be affordable housing, and a portion of which will be set aside for senior housing), over 100,000-square-feet of retail, and a grocery store along the I-35 frontage road. There will be a 1.7-acre park and 1.8 acres of private open space. The project does not require any city variances, unlike most of the original competitor’s plans.

Capital Metro envisions the development of Plaza Saltillo as a Transit Oriented Development (TOD) bringing businesses and residential uses close to the existing Saltillo rail stop, thereby helping reduce reliance on the automobile. The site already includes a one-acre rail station for the Red Line commuter rail and is among the first of such projects to be studied and implemented by Capital Metro. The goals for Transit Oriented Developments include promoting transit use, encouraging biking and walking, creating a vibrant mix of office, retail and residential space, and creating lively and safe areas around existing transit stations.

The project will sit on a 10-acre site that is a former rail yard in East Austin, surrounded by I-35, Comal Street, East Fourth Street and East Fifth Street. In anticipation of the development of Plaza Saltillo, several new projects and redevelopments have already occurred or are underway in the immediate vicinity. Among them is Corazon, a large, vertical mixed-use development bringing residential and retail to a full block between East Fifth Street and East Sixth Street.

The next step is for Endeavor and Columbus Realty to negotiate the massive development details and determine mutually agreed upon land costs with Capital Metro, a process which is expected to take several months .

Tarrytown: A native shares her favorites in this idyllic neighborhood
Northwest Hills: The centrally located 'hood with a musical past
Lake Travis: Mother-daughter duo deliver the goods on resort lifestyle