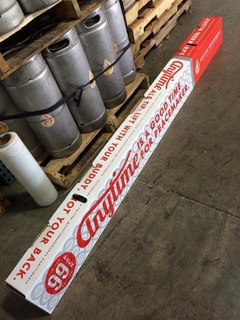 Editor's note: On August 28, Austin Beerworks began distributing the 99 packs throughout Austin. Follow the Instagram @anytimeale for up-to-the-minute details and where they're going next.

Austin Beerworks, the local brewery that boasts award-winning brews, has created the perfect way to play “99 Bottles of Beer.” Although instead of bottles, Austin Beerworks is offering a case of 99 cans of Peacemaker Anytime Ale.

This extra pale ale — the first beer ever brewed at Austin Beerworks — won a silver medal at the 2011 Great American Beer Festival. Since then, the beer has become a popular choice for local beer lovers.

With a $99 price tag, the 99-pack of Peacemaker proves that buying in bulk is the only way to go. However, there will only be a limited number of these behemoths released to Austin-area stores.

In order to find these 82-pound, 7-foot long boozy behemoths, you can follow Austin Beerworks online for announcements on Facebook, Twitter and Instagram. If you do snag one, you should probably heed ABW's advice and bring a friend along to help carry the case back to your car.