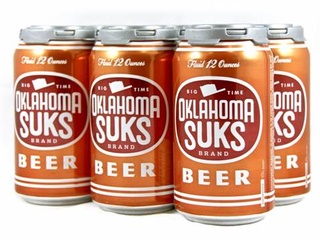 The essential UT tailgating beer is back on shelves.  Courtesy of Independence Brewing Company

It's no 99-pack of beer, but Independence Brewing Company is kicking off football season with a special brew for loyal Longhorns.

Oklahoma Suks, a seasonal beer from the Austin-based craft brewer, hit shelves this week. And this year, the beer is even more "tailgate-friendly," since it's available in cans (instead of bottles) for the first time.

Brewery founders Rob and Amy Cartwright first marketed the seasonal beer in 2006. It has been re-released in time for the Texas/Oklahoma football game every year since. Six-packs of the amber beer are available at select stores in Austin, Houston, Dallas and San Antonio, but the brewery advises you call ahead to make sure the hot commodity is still in stock.

If you aren't headed to Dallas for the big game on October 11, stop by Independence Brewing's 10th anniversary party from 4 pm - 9 pm where the seasonal ale will be on tap.