They Grow Up So Fast
Johnny Manziel says adios to college life and declares for NFL draft
LATEST NEWS
Dip into Downtown Odessa for a fun roster of food and festivals
Stronghorns vs. Gruden Grinders 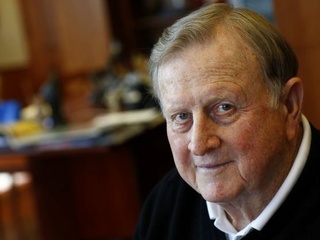 Red McCombs has his own thoughts on the head coaching gig at UT. McCombs Automotive Service

Perhaps Old Red should stick to doing what he does best. Tumblr.com

On Monday morning, the University of Texas introduced fans to the football coach of the future: Charlie Strong, the first African-American head coach in the program’s long history. While the drama of the search is over, now begins what will be an unbearable wait until next season to see what a new football team will look like with Strong in control.

Just as unbearable as the wait for the season opener will be some of the overly detailed evaluations and tea-leaf readings about whether Strong is a good fit for Texas. Few doubt Strong’s talent as a head coach, but there is a growing narrative that maybe the insular coach won’t fit in with the constant media spotlight and need to schmooze the delicate egos of big boosters.

Maybe Red was just too entranced by the glow of Gruden’s Super Bowl ring and his seductive Sandusky, Ohio accent.

There’s at least one mega UT booster who’s already starting off on the wrong foot with the new leader of the Stronghorns. Billy Joe “Red” McCombs, the namesake of the university’s business school and the Red Zone on Darrel K. Royal-Texas Memorial Stadium’s north side, spoke out about being blindsided while in the midst of his own search for a head coach.

McCombs took some time out of his busy rich old man schedule, which probably consists of money fights, to talk with Dat Nguyen and Jason Minnix of ESPN 1250 San Antonio. You can listen to the full audio from the interview, but Barking Carnival has pulled some of the more important details to take away from it.

Essentially, McCombs describes the selection process by President Bill Powers and Athletic Director Steve Patterson as a “kick in the face” to him and the other boosters who want to play the role of Jerry Jones and have final say in all football personnel decisions.

“So I don't know what the big rush was. I was kind of pleased that Patterson already said that he'd like to get it done in the middle of January. That seemed logical to me. I'm a team player, but I think they went about it wrong and made the selection wrong,” says McCombs. Instead, ol’ Red believes that Strong would “probably make a fine position coach, maybe a coordinator.”

Sorry, Charlie, but your résumé isn’t up to snuff, according to McCombs — at least not compared to the guy he was totally prepared to sit down with at Hooters: Jon Gruden. The former coach of the Tampa Bay Buccaneers and current ESPN analyst would have been Red’s choice for the position, settling in there “for 15 years, [so] we'd get at least five titles, and we would set records like we've never set before."

Now, maybe Strong wasn't on every fan's dream list (unlike, say Nick Saban or Jimbo Fisher), but why Gruden, of all people? It seems that there’s much more risk hiring someone as a head coach who hasn’t seen a sideline since 2008, much less coached on the collegiate level since the early 1990s. Maybe Red was just too entranced by the glow of Gruden’s Super Bowl ring and his seductive Sandusky, Ohio, accent.

Unsurprisingly, McCombs' views on the coaching position and Charlie Strong are being shared by many in the public, including UT Professor Ben Carrington, who voices his displeasure on Twitter.

@ESPN1250 Against this McCombs' nonsense, #TimeToStandWithStrong And we can start by finding a new name for the North End of the Stadium

But who are we to judge Red McCombs on his football managing knowledge? A man who was the owner of the Minnesota Vikings obviously knows how to run a program better than anyone working at UT.

Red McCombs has his own thoughts on the head coaching gig at UT. McCombs Automotive Service