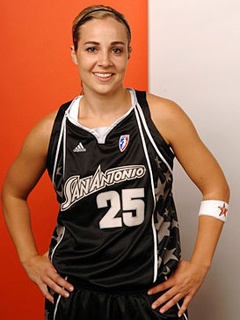 Becky Hammon is the first woman in history to be named an NBA assistant coach. Photo by WNBA/ WNBA.com

Add another milestone to the San Antonio Spurs' banner year. In addition to winning the 2014 NBA Championship, the Spurs have just hired Becky Hammon as an assistant coach — the first in the history of the NBA.

The former WNBA star spent 16 seasons in the league before announcing her retirement in July. Hammon was named one of the WNBA's "Top 15 Players of All Time" and is the seventh highest scorer in the history of the league.

“I very much look forward to the addition of Becky Hammon to our staff,” said Spurs Head Coach Gregg Popovich in a statement. “Having observed her working with our team this past season, I’m confident her basketball IQ, work ethic and interpersonal skills will be a great benefit to the Spurs.”

Though the team clinched the championship this year, the Spurs did lose two assistant coaches from the staff, Mike Budenholzer and Brett Brown. Per NBA regulations, no details about Hammon's contract have been released.

Though Hammon is the first full-time assistant coach, she is not the first woman to serve on a NBA coaching staff.  Lisa Boyer worked with the Cleveland Cavaliers in 2001-2002 while also serving as assistant coach of the WNBA's Cleveland Rockets.