Texas at Oklahoma State
Longhorns vs. Cowboys: The road to the championship starts now

McLaren, Ferrari and Formula 1: Austin gets one of Écurie25's eight supercar clubs in the world

McLaren, Ferrari and Formula 1: Austin gets one of Écurie25's eight supercar clubs in the world

Interior of a Bentley convertible Photo by Kevin Benz 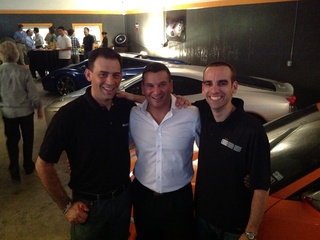 If hearing words like "Lamborghini," "McLaren" and "Ferrari" don't get your motor running, then this is not for you. Car guys — and girls — get it, though.

In fact, you don't really have to be a car guy or gal to appreciate the art, the design and pure luxury of the most impressive, fastest cars in the world — and now you can drive all of them, whenever you want, and you can thank Formula 1 and the U.S. Grand Prix for making them available.

That blur you see flying down Ben White at 200 mph next week? It's a McLaren, and the only reason the cops are chasing it is because they want to drive it.

Well... available to some: those that have the $25,000 annual membership fee (you can also pay monthly if, you prefer).

Écurie25, the largest and perhaps most prestigious supercar club in the world, opened its South Austin warehouse this week to Austin's well-heeled car geeks, allowing them to slobber and spill champagne all over the leather within $300,000+ cars with 600 hp engines.

Yes, you have to be able to afford one of these cars in order to join the club, but if you can afford it, you get access to the greatest cars in the world and pay less than a year's depreciation would cost.

Insurance is included, and you can drive at any écurie25 club in the world. There are currently eight, including Austin, and soon there will be 13, as new clubs in Dubai, Sydney, and Capetown join establishments in London, New York and other cities around the globe.

Not Dallas, not Houston — Austin (although Dallas and Houston clubs are planned for 2014).

Why Austin? Because of Formula 1.

"Australians, Europeans, Saudi Arabians — these folks will come to town and fall in love," explains Austin écurie25 Manager Justin Blackburn. "They will buy houses, open offices, and they get this concept. Formula 1 coming to Austin helped us bridge a gap for this business that wouldn't be around without Formula 1. Austin is very forward thinking. This will be embraced here. With Formula 1, the Austin mentality allows this to work."

"We have a strong affinity with Grand Prix," says écurie25 founder Chirag Shah. "We'll do an event on Saturday [before the race], see the qualifying, and then party in Austin. It's an experiential event for our members. Austin is an emerging, up and coming city with a motorsport facility as good as any in the world that we can use."

Austin has four members already, sharing almost a dozen cars including a McLaren, a Lamborghini, several Ferrari's, a Bentley and a Rolls Royce. Austin is also the first écurie25 club to include super bikes too.

Those new Austin members join an exclusive club of 450 around the world with more to come.

That blur you see flying down Ben White at 200 mph next week? It's a McLaren, and the only reason the cops are chasing it is because they want to drive it.

Interior of a Bentley convertible Photo by Kevin Benz