Bike Metaphor Alert!
All I ever need to know I learned on the Thursday Night Social Ride

Texas vs. Oklahoma State
Old Man Weeden and that other team of throwin' Okies give Horns shot at atonement
LATEST NEWS
Mueller's first boutique hotel books into bustling Austin neighborhood
Down and Distance

Last thoughts on Al Davis: The American speed addiction and the NFL

Last thoughts on Al Davis: The American speed addiction and the NFL 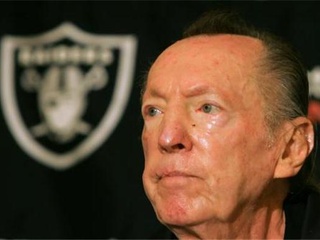 The Texans lost to the Raiders yesterday, meaning that Houston still hasn’t had a chance to pull away in the two-man-race that the AFC South has already become. But who cares about that, because Raiders owner and GM Al Davis died this weekend at 82, and Darius Heyward-Bey—the first-round draft pick in 2009 that left fans thinking that the old man was senile—damn near made him look like a prophet after picking up 99 yards and a touchdown in the win.

There have been plenty of powerful tributes to Davis penned since Saturday, and it’s hard to overlook how significant a figure he was: He’s more or less the guy responsible for the NFL/AFL merger that began what is now described as “the modern era”; he maintained a firmly progressive presence in the league, hiring the first Latino coach, the first African-American NFL head coach since Fritz Pollard guided the Hammond, Indiana Pros in 1920, the first woman as a team’s CEO; he somehow managed to make football, that most mainstream of American activities, into an object of counterculture cool just by the colors of his team and the way his players carried themselves…

And yeah, all of that is true, and important. But Heyward-Bey’s touchdown was a reminder that Davis wasn’t just a progressively-minded visionary of the game. He was damn near an American prophet.

You make it sound like he was Steve Jobs or something

The number one thing that Davis brought to the game, if you had to boil it down to a single word, is this: speed. Davis understood something fundamental about the role of speed in football, and he based his philosophy around it. Hunter S. Thompson attributed this quote to Davis: “Speed kills. You can't teach speed. Everything else in the game can be taught, but speed is a gift from God.”

He’s right, of course—speed is deadly, and the combined 1.4 billion passing yards that NFL quarterbacks have put up so far this year by throwing to the speediest crop of wide receivers the game has ever seen offers proof. Pierre Garcon is almost making Curtis Painter look like a professional quarterback by being so damn fast; Wes Welker is on pace to break (one-time Raider) Jerry Rice’s single-season receiving yards record by Week 12; and on special teams, Devin Hester shattered the all-time punt return record last week by scoring 11 times in 182 attempts, while it took the previous record holder over 350 attempts to get to 10.

Yeah, speed kills, and Davis changed the game by figuring that out. Darius Heyward-Bey, that maligned first-rounder who vindicated Davis’ faith in him by helping lead the Raiders over the Texans, caught Davis’ eye because of his quickness. He wasn’t good at most other things a football player needs to be good at, but Davis saw something in his speed—something that Heyward-Bey delivered on by accelerating after shaking off a tackle to blaze away from three Houston defenders in his touchdown reception on Sunday. If he develops slowly, the way that Raiders running back Darren McFadden did, evolving into one of the premier players in the game after looking like a first-round bust, then Davis will look even smarter. But either way—the key here is speed.

That’s the thing that made Davis seem so damn prophetic—his speed kills philosophy represented a way to make the NFL look more like what we want out of life. The NFL rose to be the most popular game in America by a wide margin after it adapted to the style of play that Davis favored. Last week’s Monday night game between the shitty Tampa Bay Bucs and the shittier Indianapolis Colts was still watched by twice as many people as a MLB playoff game featuring the Yankees, and you can see signs all over America that the top thing we care about is speed. There’s actually a woman in Michigan who is suing the studio behind the movie Drive because the fucking thing didn’t move fast enough for her.

Now that the features have leveled out, the guiding principle in the smartphone wars have been about which is the fastest. In politics, one of the reasons we haven’t seen a new challenger emerge in the GOP primary race is that it’s just too damn long until the first vote happens, and nobody wants to throw their hat in, only to have to sit around for months debating before they can win something. The biggest complaint about Occupy Wall Street and the affiliated satellite demonstrations is that they’ve been at it for weeks now and haven’t just given everybody a speedy soundbite about what they want.

In America, the thing we care about most is speed. Al Davis, more than anyone else to be involved with football, saw that. And as a quintessential American himself, he cared about it, too. When he was in a position to make the game reflect that American urge for quickness and action, he did so, and the results couldn’t speak more clearly.

Football now, today, is the game that most clearly fulfills our drive to see things move as quickly as possible, and we respond to that by watching it and caring about it more than we do any other competition. This is what we’ve wanted, and Al Davis gave it to us.