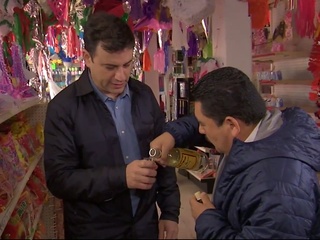 Piñatas and Tequila: A drinking game we can get behind. Jimmy Kimmel Live/YouTube

On Thursday, the show aired a segment with Kimmel and sidekick Guillermo called "Piñatas and Tequila." The premise is simple: Buy a bottle of tequila and hire a pedicab to drive you up and down East Cesar Chavez. Head into the local party stores and every time someone says "piñata," you take a shot of tequila. Then drunkenly buy as many piñatas as will fit in your pedicab.

The entire sketch is hilarious (it's well worth the eight minutes if only for the last shot), but it's bittersweet as well. In the segment, which was filmed earlier this year, Guillermo and Kimmel make stops at Cesar Chavez shops like Piñata Party Supply, Raquel's Partyland, Piñataland — and the now-demolished Jumpolin.

In the piece, Jumpolin owner Sergio Lejarazu takes the late night host on a brief tour — which of course ends in a shot of tequila when Lejarazu says, "Pinata!" It's an unexpectedly sweet moment after weeks of anger and outrage among the community.