onstage in austin
My dream show does exist: Jeff Mangum to headline ACL Live on April 29

Get your SXSW music groove on with Austin's top music bloggers

Get your SXSW music groove on with Austin's top music bloggers 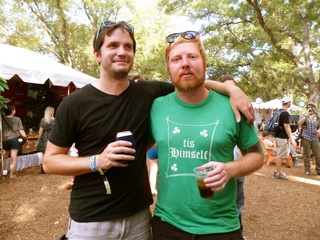 It's here: That time of year when it seems anyone who's anyone in the music, film and interactive business — and the wannabes — are descending on our fair city for the massive mosh pit known as the SXSW Festival.

Throughout this month and beyond in the Live Music Capital of the World, there are a few Austin bloggers that really know the low-down on our music scene. Who's playing, who's hot, who's up and coming, and behind the scenes look at local and visiting bands. If you want to know about all things music in this city, check out these blogs. And, spoiler alert — the clear winner among these bloggers in terms of live music venues in Austin is the Mohawk.

earache! is the Austin Chronicle music blog, and Hernandez is the Chronicle's Music Editor. He became immersed in music because his parents wouldn't let him watch TV when he was growing up. "But I always had a stereo, and since I was an only child, it became my best friend. Plus I was fascinated with my parent's stereo in the living room, and my mom's 8-track tapes. My favorite was the soundtrack to Woodstock, which I played over, and over, and over."

Two of his favorite SXSW memories are being right in front of the stage for Johnny Cash at Emo's, and seeing Tom Waits at the Paramount. And behind the scenes? "Tooling around in a small auto with John Cale, and introducing Smokey Robinson's keynote speech then coming offstage to his outstretched arms. And a bear hug from Moby Grape's Jerry Miller!"

Spoiler alert — the clear winner among these bloggers in terms of live music venues in Austin is the Mohawk.

As for favorite Austin artists, Hernandez is currently enamored with Dikes of Holland. Butch Hancock has also been a recent favorite, and before that, Alejandro Escovedo.

"My first and last love nationally will always be the Rolling Stones, but if I could only take one artist, or even one song, to my desert island it'd be Duke Ellington, hands down," he adds. When it comes to naming a favorite place in town to listen to music, however, mum's the word with Hernandez. He says he loves them all.

Wintle had listened to music casually as a kid, until the day when one band changed everything for him. The band was Oasis, the album Wonderwall, and Wintle was hooked on music. "I became obsessed with The Beatles, Oasis, Blur and Radiohead. From there is became a never-ending obsession/quest to find more."

He demurs from naming a favorite Austin band, claiming that it would not be diplomatic. "We have a really great scene here and there are a bevy of fantastic artists making music in this town," he says. "If I name a few bands, I'll be leaving others out and I don't want to do that.  I love them all equally, like they are my children (even the really shitty ones)."

He doesn't hesitate, however, in naming Radiohead as his favorite non-local band of all time. "I always say they are the base of my musical pyramid. All other bands I like are stacked on top."

For Wintle, SXSW is always a blur. But one memory does stand out: a party thrown in 2010 by I Am Sound Records at Malverde. "What made it great was how the venue was so small and not set-up for live-band gear. As the night progressed, I somehow ended up on the stage by the time Sleigh Bells went on. You can see Alexis standing right next to me as she walks out on stage in my video."

His favorite places to see shows are the Mohawk & The Parish. "Skinny's is really great and I think the new Emo's on Riverside and Beauty Ballroom are also really nice venues. Lambert's has moments of greatness but it also tends to attract groups of people who want to drink fancy cocktails and talk over the music, which is highly irritating."

For Alyx Vesey, that a-ha moment came in the form of Patsy Cline. She was on a road trip with her aunt when the magical voice reached her ears for the first time. "Hearing the longing in her voice while taking in the open road left a major impression on me that I still return to as an adult."

"Church of the Friendly Ghost and Central Presbyterian are lovely venues — great acoustics and a kind atmosphere. Plus the opportunity to sit down is welcome when you're on your feet all day. But I'm just as fond of walking around between sets and hearing all that music bleed out into the street."

Her favorite behind-the-scenes memory of SXSW was nervously shaking Jessica Hopper's hand "three or four times in the course of a five-minute interview at a Girls Rock Camp day show." Vesey also has fond memories of taking in a Ted Leo show with Esme Barrera at French Legation last year. "SXSW won't be the same without you, girl," she adds.

As far as a favorite Austin band, Vesey likes to plug the local artists playing Get Off the Internet, an unofficial event she helped put together with a group of feminist, queer music bloggers (playing on March 14 from 12-6 p.m. at Cheer Up Charlie's). "Big ups to Christeene, Chainbow, No Mas Bodas, Las Krudas, Agent Ribbons and the Holy Boats. As for artists outside of Austin, I like everyone else on our bill, as well as Noveller, Psalm One (who we should have booked), Georgia Anne Muldrow, KFlay, Circuit des Yeux, Jean Grae, Tamar-Kali, tUnE-yArDs, Dessa and Screaming Females."

Cheer Up Charlie's is, in fact, Vesey's favorite place to hear live music. "They have been so supportive and helpful to Get Off the Internet. Church of the Friendly Ghost and Central Presbyterian are lovely venues — great acoustics and a kind atmosphere. Plus the opportunity to sit down is welcome when you're on your feet all day. But I'm just as fond of walking around between sets and hearing all that music bleed out into the street."

Austin Town Hall is considered by many to be the blogging bible of music in Austin. According to the website, Lankford fashions himself as Rob from High Fidelity, though he more closely resembles Barry. While Ray grew up in Lufkin with a studied history of teenagers growing up listening to Dave Matthews, Ryan moved beyond it all to forge a band simply known as “Jesus Hands,” eventually getting himself to Austin, where he discovered great music.

As for his addiction to music, Lankford blames his sister, who was in college when he was 10 years old. "She'd bring me Cure and New Order albums, and it all just sounded so much better than the MC Hammer hits my friends were listening to at the time (1990). For some reason, it struck me that it was okay to be weird, so I started wearing eyeliner with my Umbros (the 90s equivalent of Nike running shorts). Since then, I've just tried to love music, and be weird."

Lankford and Ray say that SXSW was different back in 2003 or 2004, before it was rampant with parties. "You had to be in the know to get in the good ones," Lankford says, "and I was fortunate to know enough people to get into this party to see The Go Team and Bloc Party (before they blew up). The music that night blew me away, but it was the wall of free Sparks and Pabst that  kept me dancing and partying til 4 in the morning."

It's also rumored that he followed Elijah Wood all night, who was also at the party, calling him Frodo. "Yep, I was that guy," he admits. "But, I loved every minute."

Ray mentions Mohawk and The Parish as favorite spots to catch music in town. But the guys confess that they'll go almost anywhere to catch a show—except Antone's.

After moving to Austin in August 2010, Delloro launched Ovrld.com (pronounced "overload") with his friend and business partner, Daniel Valle. SXSW 2011 was Delloro's first festival. "So my greatest SXSW memory will be this year on March 13, when we co-host our first showcase with local rockers the Boxing Lesson at Guero's. It feels like a dream come true, and many of our favorite locals acts will be gracing the stage."

"To listen to recorded music, I love nothing more than to bring my headphones and my dog down to Auditorium Shores, and lose myself in an album."

Delloro says he was born with music in his blood. "My dad was a local radio personality in Lexington, Kentucky, where I grew up, and so I was around music constantly. We had around 6,000 vinyl records, so it was like I had Napster before Napster — I could just read about any musician and it was likely my parents had at least something I could listen to. I was kind of doomed into this music thing from the start."

The first concert he recalls was Bruce Springsteen, which his parents took him to see when he was seven; but he knows they took him to other shows long before that, which he just doesn't remember.

Like other bloggers, he has difficulty naming a favorite local band or artist, with so many amazing musicians to pick from. The abundance of talent makes it hard to choose just one, Delloro says, and anyway his favorite tends to change from week to week. However, he names The Great Nostalgic as a talented band that is criminally under-appreciate.

"Their depth of skill in terms of musicality and lyricism is remarkable, and I just can't believe they aren't bigger. Anyone interested in quality, thoughtful rock music should check them out."

He also loves the Mohawk, with its open-air environment, multiple levels and intimate feel. He also gives a shout-out to Skinny's Ballroom, which he calls a classy little place that books great acts. "To listen to recorded music, I love nothing more than to bring my headphones and my dog down to Auditorium Shores, and lose myself in an album."

Lake Travis: Mother-daughter duo deliver the goods on resort lifestyle
Tarrytown: A native shares her favorites in this idyllic neighborhood
Four Points: An area expert sums up this quartet of neighborhoods