On The Move
East Side King's Thai-Kun says goodbye to Wonderland location
LATEST NEWS
How to watch Biles, Chiles, and all Tokyo Olympic Gymnastics action
Thai One On 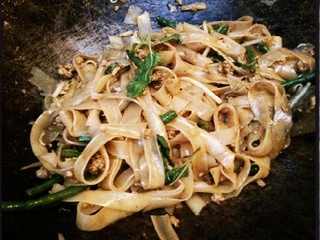 Pranom pops up at Ten Bells Tavern in Dallas on December 31. Photo courtesy of Pranom 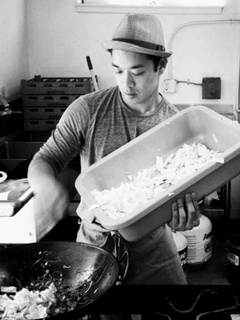 A Thai pop-up concept from Los Angeles called Pranom is coming to Austin in the new year, when it will serve California-style Thai during an event at HandleBar downtown.

The Austin stop is part of a Pranom tour through the Southwest, which kicks off at McPherson Cellars in Lubbock. Other cities include Dallas and Albuquerque, New Mexico.

Pranom is the venture of Dream Kasestatad, an actor/producer who supplements his LA showbiz career by hosting Thai pop-ups at restaurants such as Bar Lubitsch; Biscuit Cafe in West Hollywood; and The Charleston, where Thai Iron Chef contestant Jet Tila once cooked. Kasestatad comes by his knowledge first-hand; his family owns a number of Thai restaurants in Lubbock, such as Thai Thai and Choochai.

The pop-up at McPherson Cellars was coordinated by events director Candice Neill and served as the tour's linchpin.

"Dream is bringing his LA genius and spreading it across Texas," she says. "The way Dream describes it is a pop-up kitchen. They'll do the cooking outside. We have a large event center, where we'll have seating and cocktail mingling, paired with some of our wines."

The menu at some his previous events has been fixed-price, with four courses, but Neill expects it will be more casual.

"I think we'll serve a basic pad Thai, another noodle dish and a chicken curry dish. It'll be three things," she says. "There will be all the side sauces to dress it up or make it more spicy, plus some appetizers."

Kasestatad says the events in Austin and Dallas will definitely be casual, with a couple of courses, possibly pad Thai, pad see ew or drunken noodles, costing a flat fee from $12 to $16, depending on venue. "We'll probably do seatings so we can get the food out, so we recommend you call ahead of time and get your name on the list," he says.

Pranom's full schedule is as follows:

Pranom pops up at Ten Bells Tavern in Dallas on December 31. Photo courtesy of Pranom

7 ways to have the best summer vacation ever in Galveston
See what's brewing in Boerne with a delicious beer tour
What you absolutely must eat, see, and do during 48 hours in Fort Worth