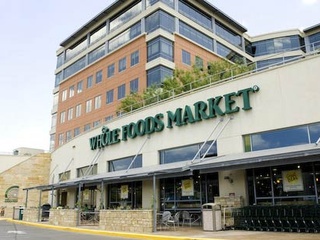 The flagship Whole Foods Market on Lamar is getting remodeled.

Eight years after it opened, the flagship Whole Foods Market store at West Sixth Street and North Lamar Boulevard is about to get a serious facelift. Renovation starts this week and will continue over the next four to five months, according to Whole Foods spokeswoman Rachel Malish.

Construction will happen in phases “to ensure the convenience of our shoppers is not compromised,” Malish says.

“It’s our flagship store, and we want Austin to know that we’re constantly finding ways to make it better,” says spokeswoman Rachel Malish.

As part of the remodel, all of the prepared-food venues in the 80,000-square-foot store will be upgraded, including the kitchen, salad bars and hot-food bars. “All venues will have a new look and feel, and some are being relocated entirely, such as our Kikka sushi bar, which will move closer to the seafood department,” Malish says.

The coffee and juice bars also will be redone, and new express lanes will be added in the checkout area.

“The main purpose of the renovation is to continue to improve the shopping experience for our guests,” Malish says. “It’s our flagship store, and we want Austin to know that we’re constantly finding ways to make it better.”

The price tag for the reno wasn’t available, but supermarket consultant David Livingston told Retail Leader magazine that the makeover of a grocery store can boost sales by 5 to 10 percent.

The flagship store sits below the global headquarters of Whole Foods Market Inc., a chain of natural and organic grocery stores with more than 340 locations in the U.S., Canada and the United Kingdom. Whole Foods has four stores in the Austin area; the Lamar store is one of the company’s largest.

“We’re proud to offer such a world-class customer experience to our hometown Austin shoppers, who’ve been loyal to us from the beginning,” John Mackey, co-founder and co-CEO of Whole Foods, said when the flagship store debuted in 2005.

Since its premiere, the flagship store has become a major tourist attraction. A Fodor’s travel review described the store as “both a showcase for the company’s philosophy and one of the most entertaining supermarkets you’ll ever visit.”

Simon Williams, CEO at consulting firm Sterling Brands, told Adweek in 2005: “Whole Foods is a blend of retail engineering and retail theater. It sets out to wow people. They are magicians when it comes to merchandising.”

Simon Williams, CEO at consulting firm Sterling Brands, told Adweek in 2005: “Whole Foods is a blend of retail engineering and retail theater. It sets out to wow people. They are magicians when it comes to merchandising.”